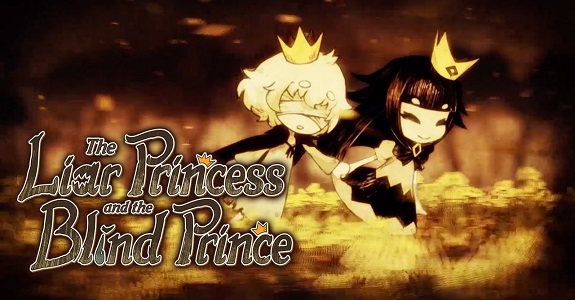 The Liar Princess and the Blind Prince was released back in May in Japan, where it’s known as Usotsuki Hime to Moumoku Ouji. And yesterday, NIS America announced that they were bringing the game to Europe and North America, though not before next year.

For those of you who never heard of the game before, The Liar Princess and the Blind Prince is a puzzle platformer where you have to guide a blind prince through a perilous forest. It features a charming hand-drawn artstyle, which makes the whole thing look like a moving storybook. The game will be playable in English, with Japanese voices.

The Liar Princess and the Blind Prince follows the tale of two lonely hearts brought together through a mutal misunderstanding. In it, you control the wolf, transformed to the guise of a princess who guides the blind prince through a perilous forest in search of a witch capable of returning his sight. The forest is home to a number of hostile beasts intent on ending your journey prematurely, as well as hazardous traps that put the prince in danger. Transform into the wolf to dispatch your foes and guide the prince carefully as a princess to ensure his safety, in search of a happy ending.

Deep in the forest, a solitary wolf sings. Charmed by this beautiful voice, a curious prince follows its song only to find and startle the wolf, who blinds him. Together, they embark on a journey to restore his sight. But every gift has a price in this fairy tale of love and loss.

Finally, here’s the list of key features, as well as some screenshots:

The Liar Princess and the Blind Prince (Switch) comes out in 2019 in Europe and North America. The Upcoming Games page has been updated!