Also, the latest Gym Cup event is the Water Gym Cup, and it went live yesterday. Here’s all you need to know about it:

Finally, if you log-in before January 6th, you can receive a [EX] Honchkrow figure!

And in case you missed it: a new Software update was released on Wednesday. It brings the game to Ver. 6.2.10, and provides various bug fixes. More details about the various Software updates for the game can be found on this page!

And the next one has already been announced:

Earlier this week, it was confirned that the special distribution for Pokémon Sun, Moon, Ultra Sun, and Ultra Moon will also take place in Europe and North America, from January 7th to September 2nd to be more precise (exactly one day before Japan, for some reason!). It will allow you to get the following rare barries via Mystery Gift:

This week, a new set of stickers was added to the LINE Shop, for use with the LINE messaging app: Pokémon Yurutto. Here’s a preview picture: 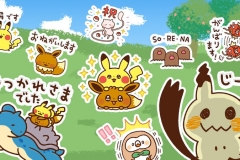 Yesterday, it was announced that the European International Championships will take place from April 26th to April 28th in Berlin (Germany).

Here’s a video retrospective for Eevee Project (a project aimed at promoting Eevee in Japan), which is coming to a close: