Aksys Games have announced that Collar X Malice will be released on June 25th in Europe and North America.

As a young police officer, you must save a city under siege! A terrorist organization’s brutal attack has left you fitted with a deadly souvenir – a poisonous collar that could end your life at any moment. With time running out, five strangers offer their help – but which of them can you trust? Will you be able to save your own neck, and the lives of those around you, or will this case end in disaster?

Collar X Malice (Switch) comes out on June 25th in Europe and North America. The Upcoming Games page has been updated!

This week, on May 28th, Splatoon celebrates its 5th Anniversary. Famitsu is going to have a special full-cover for the series, and a 55 page-long feature to celebrate. 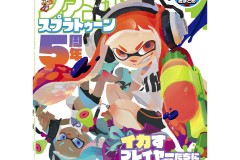 Adam’s Venture: Origins (Switch) comes out on the Nintendo eShop on May 29th in Europe and North America, and at retail later this year.

Here’s a couple of videos for Harukanaru Toki no Naka de 7:

Here’s the recording of the latest livestream from Soesdesco, showcasing Monstrum:

Monstrum (Switch) does not have a release date at retail yet.