The 3rd part of the B.L.A.D.E. short-story now has an English fan-translation! You can find it there.

Just like every other Thursday in the past few months, Monolith Software have just updated their official website for Xenoblade Chronicles X, with a look at positionning, a video about Overclock Gear, a new batch of screenshots, some concept-arts and more. As usual, you can find a breakdown of all new stuff below!

During battle, your position matters when using certain Arts (some of them are more powerful from a specific position). You can also combine arts to create combos (just like in Xenoblade Chronicles), like Break > Topple > Daze. This allows you to deal even more damage than by attacking mindlessly.

You can also increase the power of your attacks by attacking from blind spots: from behind, from above… Finally, it’s possible to target specific parts of a monster’s body, in order to cut it. When you do that, the monster can’t use that part to attack you, and you can even get bonus items (important for some quests).

When using Overclock, you can just chain Arts again and again, without having to wait for them to reload, in order to deal massive amounts of damage. A counter appears on the screen, and the higher it goes, the more damage you’ll deal in the end. Overclock Gear also allows you to use Triple Recast, where you triple-charge an Art: this results in an even more powerful attack than with a double-charged Art. Finally, you can use Triple Recast with all your teammates, and the end result is quite devastating.

Here’s a video about it, as well as a screencap: 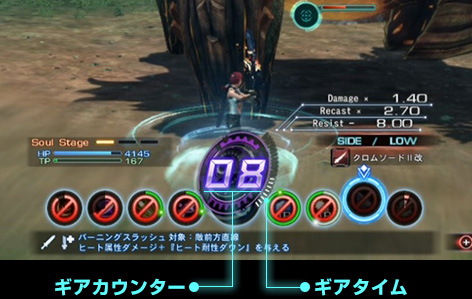 The third part of the B.L.A.D.E. short-story is available there. An English translation should pop up in the upcoming days.

Here’s a couple of concept-arts by Mr. Kazama:

And finally, some new screenshots for the game, showcasing some of the monsters and environments:

Xenoblade Chronicles X (Wii U) comes out in April 29th in Japan, and later this year in Europe and North America.