Tic Toc Games have announced that B.ARK has been delayed to early 2021 in order to provide the best experience possible. It was previously slated for a late 2020 release.

Here’s the message from the developers: 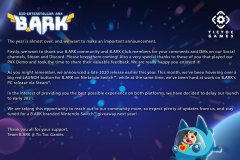 B.ARK (Switch – eShop) comes out in Early 2021 in Europe and North America.

Here’s the preview video for the latest Summon Showcase in Dragalia Lost, Cursed Connections (Part 1) (which runs from December 31st to January 7th):