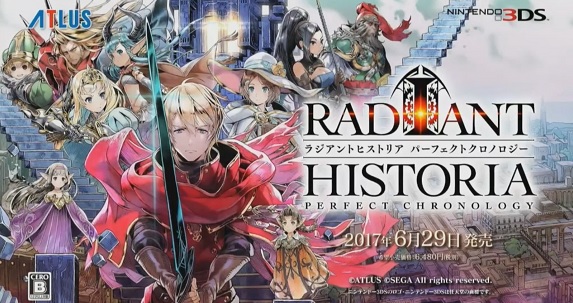 Yesterday, Atlus shared the latest character trailer for Radiant Historia: Perfect Chronology, the Nintendo 3DS “remake” of the Nintendo DS cult-classic. This time around, it’s characters from Granorg (the Kingdom located on the west side of Vainqueur, which was founded by the descendants of an empire that once ruled the entire continent) that introduced.

Speaking of Radiant Historia: Perfect Chronology, Atlus shared an updated picture of the contents of the Perfect Edition yesterday:

Yesterday, Atlus launched a poll on the official website of Etrian Mystery Dungeon 2, which runs until May 19th. Fans are invited to vote for their favorite class in the entire Etrian Odyssey series, and the results will be revealed next week during the Etrian Odyssey 10th Anniversary livestream (along with those of the soundtrack poll).

If you’re interested, you can cast your vote on this page. Obviously, it’s only available in Japanese, but you don’t really need to know a single word to vote: just scroll past the daily rankings, chose the game your favorite class is from, and then vote. By the way, it looks like you can vote more than once, and for a different class each time if you want, as long you do not use bots of scripts to spam votes.