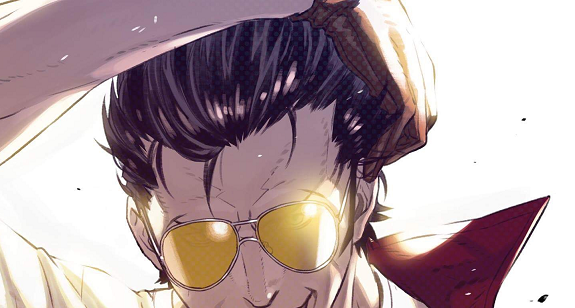 Unfortunately, it’s not clear whether this is really No More Heroes 3, though at the very least, Suda 51 has confirmed this was a brand new game (so not a port, or remake). In an interview with 4Gamer (translated by Gematsu), he reveals that he will be personally writing the full script, and directing the game… something he hasn’t done in 10 years!

Suda 51 also confirms that Yuusuke Kozaki (also known for his work on the Fire Emblem series) would once again be involved, but that this time around, he would like to also have other people work on chara-design. When he goes to events overseas, he often meets people asking him to let them work on the new No More Heroes… including some rather famous people, apparently.

Here’s the artwork of Travis that Yuusuke Kozaki drew:

If you’re wondering how far along development is, you better muster all the patience you can before reading the next few lines, because this new No More Heroes game is nowhere near ready. In fact, development hasn’t truly begun. The overall picture, the essential parts, and the direction for game design have been nailed down, but Suda 51 hasn’t even started writing the plot yet.

In other words, don’t expect this new No More Heroes any time soon!

No More Heroes (Switch) will be released in 2018… at the earliest.