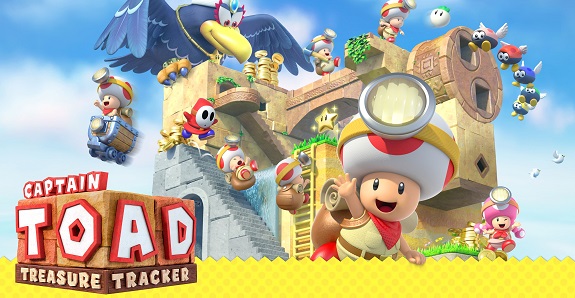 Today, pre-orders for Captain Toad: Treasure Tracker went live in Japan (not on the Nintendo eShop yet). To “celebrate”, Nintendo revealed a brand new trailer for the game:

The Nintendo 3DS version of the game will offer stereoscopic 3D display, and offers touch controls. On Nintendo Switch, you can share a Joy-Con with a friend and play in co-op! Both versions of the game cost the same: 3 980 Yen.

Here’s the latest video for the Octo Expansion for Splatoon 2, showcasing yet another level:

Dillon’s Dead-Heat Breakers (3DS) comes out on May 24th in North America, and May 25th in Europe.

In Adventure Mode of #HyruleWarriors: Definitive Edition, battle it out on 10 different maps inspired by the original Legend of Zelda overworld to unlock characters and get powerful weapons! pic.twitter.com/eVYaQiPZ2X

The latest piece of concept art for Super Mario Odyssey showcase the Lochladies: the inhabitant of the Lake Kingdom (and more precisely Lake Lamode). They were obviously designed as mermaid, but they were also made to look like fashion designer. That “dress” of theirs is actually scales!

Here’s the piece of concept-art:

The latest Party Crash event for ARMS has been announced! It will take place from May 25th to May 28th, and will pit Master Mummy vs. Max Brass.

Here’s a slightly updated version of the promo video for My Nintendo: