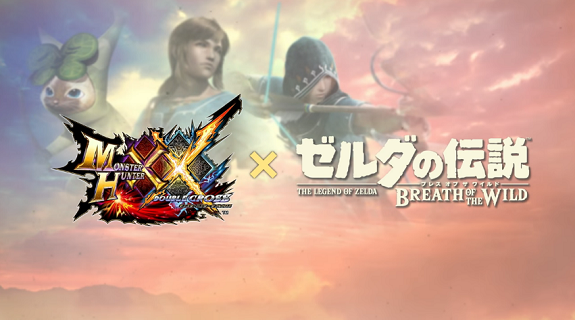 Today, Capcom held a press conference about the upcoming release of Monster Hunter XX, and used it as an opportunity to make some more collaboration announcements.

But first, here’s the 4th (and most likely final) trailer for the game:

The first one is with The Legend of Zelda: Breath of the Wild, which shows just how much Capcom loves Zelda for their Monster Hunter collaborations (there’s already been one with the series as a whole, but also The Wind Waker… not to mention the one with Majora’s Mask in Monster Hunter Stories).

From April 24th to May 31st, players will be able to get three Event Quests from 7-Eleven hotspots. Clearing them will allow you to get the necessary materials to craft:

And also from April 24th to May 31st, players will be able to get special Breath of the Wild-themed Guild Card background and titles, along with a special Palico (not Zelda-themed) from the 7-Eleven hotspots:

There’s also a special collaboration with the Ace Attorney series, that lets player get a special armour and weapon for your Felyne / Palico:

But wait, there’s more! Monster Hunter XX is also getting collaborations with Okami, Strider, and Garo:

And it turns out that Daigo (a famous artist, who happens to be a huge fan of the Monster Hunter series) is back for the TV Commercials for Monster Hunter XX. It turns out he’s also getting some special collaboration content too!

Here’s the commercials (+ two making of videos), and some pictures of the content:

And here’s pictures of the promo campaign for launch day, as well as the special event to be held at specific stores on the same day:

Finally, here’s a video and some pictures of the press conference where all those collaborations were announced: