Retro Studios isn’t exactly known for having the most modern website ever (understatement of the year!), but yesterday, a new version of said website was launched: you can click here to check it out. Of course, don’t go there in hope of finding clues about their next project (there isn’t anything)!

Return to PoPoLoCrois: A Story of Seasons Fairytale

Heads up for those of you who have been reading the PoPoLoCrois manga on the official English website of Return to PoPoLoCrois: A Story of Seasons Fairytale: the latest part is now available!

Here’s the latest two screenshots for Bokujou Monogatari 3tsu no Sato no Taisetsuna Tomodachi (latest entry in the Story of Seasons series). It shows the post office, where you can send (and receive) letters to your various friends in the three villages.

Last year, players could welcome a character from the Monster Hunter series in Animal Crossing: Happy Home Designer. It was a Felyne, who came with a request: if you accepted it, you could get various Monster Hunter-themed items. Good news for players who missed this collaboration DLC: it will be once again available from March 1st (9AM) to March 31st (11.59PM), in Japan! 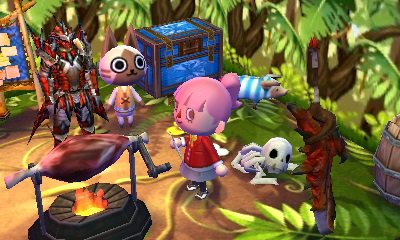 Unfortunately, we don’t know if/when it will be available again in Europe and North America.

If you have a Japanese Nintendo 3DS, you can now download the demo version of Medabots Girls Mission, which comes out on March 10th in Japan. It lets you play through the beginning of the story with Megumi Kaido and Rokusho.

Today, it was announced that Musicverse would launch on March 2nd in Japan, where it will cost 800 Yen. Here’s a trailer and some screenshots:

The Nintendo 3DS version of Mario & Sonic at the Rio 2016 Olympics came out last week in Japan (on February 18th), and today, it’s the arcade version that launched in Japan. It was initially planned to launch in Spring, but it looks like things went more smoothly than expected.

Here’s another card from the 4th series of Fire Emblem 0 cards, launching on March 17th in Japan:

Here’s pictures of the various Kirby goodies from the Pupupu na Gourmet Tour:

Today, a new event went live, and will last until March 9th. During this event, if you manage to beat two specific bosses, you will be able to get a costume for two of the playable characters.

On July 6th, Archie will release “Sonic: Mega Drive”, a special one-shot celebrating the 25th Anniversary of the Sonic series. It will be written by Ian Flynn and illustrated by Tyson Hesse, who were behind Archie’s 2015 Sonic and Mega Man crossover “Worlds Unite.” As for the story, it’s set in the same era as the original Sonic games, and will feature Tails, Knuckles and Amy Rose.

Sonic spins into a brand new, Classic-styled, SUPER SPECIAL one-shot “Mega Drive”! Join Sonic, Tails, Knuckles and Amy Rose on a brand new adventure—set after the fall of the Death Egg! The nefarious Dr. Eggman is trying to build a new engine of destruction: the MEGADRIVE, and it’s up to Sonic and his whole crew to stop the mad doctor and save the day! Join Sonic and his friends in this special commemorative issue celebrating the 25th Anniversary of the Blue Blur!

Here’s the trailer for Parascientific Escape: Cruise in the Distant Sea, which comes out on March 3rd in Europe: