Last week, Animal Crossing: New Horizons was unleashed upon the world, and what may very well be the biggest Nintendo Switch game of the generation was finally released after months (years) of anticipation. According to the early sales data report from Famitsu, the game sold no less than 1 880 626 units at launch, during the first 3 days. This is no less than the best debut ever for a Nintendo Switch game at retail in Japan.

This wouldn’t be too much of a surprise, though: Animal Crossing: New Leaf went on to sell well over 5 million units on Nintendo 3DS, after all, and there’s a definite possibility this Nintendo Switch entry will sell as much (outselling it would be quite the feat).

Speaking of previous entries, this new game had the best debut for the Animal Crossing, and by a wide margin. The previous record holder, Animal Crossing: New Leaf sold “only” 721 786 units at retail. However, it’s worth noting that this game suffered from massive shortages at launch, which led to much higher digital sales than usual for a Nintendo 3DS game. But even if you factor in those digital sales, Animal Crossing: New Horizons outsold its predecessor by a wide margin.

Speaking of digital sales, they are the reason the title of this article claims the game sold over 2 million units at launch in Japan. Indeed, Famitsu’s data do not take into account digital sales (only physical Download Code cards sold at retailers), which means it has actually sold (a lot) more than 1 880 626 units at launch. Even with a 10% digital ratio (which would be abysmally low), we end with well over 2 million units.

Of course, there’s little doubt the digital ratio is much higher than 10%, as early sales data (mainly the Nintendo eShop rankings, that the game has dominated since the minute digital pre-orders went live) show that digital sales are quite strong. Said sales were no doubt boosted by the Nintendo Switch Game Vouchers, which have been doing wonders on digital sales of first-party games, as well as the fact Animal Crossing: New Horizons is the perfect game to have at all times on your console.

Unfortunately, we will have to wait for official numbers from Nintendo before finding out how much the game has sold digitally. The only thing that can be said with certainty at the moment is that it sold well over 2 million units with digital sales included. It’s quite likely it has the biggest opening for a Nintendo Switch game, period (not just at retail). It may even have the best debut ever for a game in Japan (all platforms combined).

Hardware-wise, sales quite literally exploded for the Nintendo Switch, with nearly 400 000 units sold in a single week (392 576 units). This is no less than the best week ever for the console: even at launch, it didn’t sell as many units! In fact, it’s pretty much guaranteed to be the best week of all times for the console, as Nintendo simply do not have any other game/series left to pull such massive numbers.

There’s several reasons to explain this massive jump in sales:

In comparison, the Nintendo Switch sold only 56 812 units during the same week last year, but with all that was released during Week 12 2020, a direct comparison is a bit unfair.

Unfortunately, sales are going to drop sharply during Week 13: a drop is pretty much the norm after such a massive week after all. Besides, production and shipments of Nintendo Switch consoles are still impacted by the current Coronavirus pandemic, and it’s unlikely Nintendo has massive amounts of consoles sitting somewhere. In fact, Nintendo have even confirmed that the next shipment for the Animal Crossing: New Horizons bundle (currently sold out) will only get a new shipment in early April.

This year, the Nintendo Switch has already sold 1 417 791 units (vs. 919 371 units in 2019 after the same amount of weeks), and there’s a definite possibility it will reach 2 million units before the end of Q2 (June 30th). Of course, that would be dependent on shortages ending soon, as they are the one thing holding back sales at the moment.

Since launch, the Nintendo Switch has sold 12 801 222 units, and it should reach 13 million units within the next few weeks.

The graph below shows that during Week 12, the Nintendo Switch Lite massively outsold the OG model, despite the launch of the Animal Crossing: New Horizons bundle. That bundle sold a non-negligible amount too, as stocks for the regular pack were extremely limited before in the previous weeks. 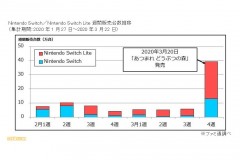