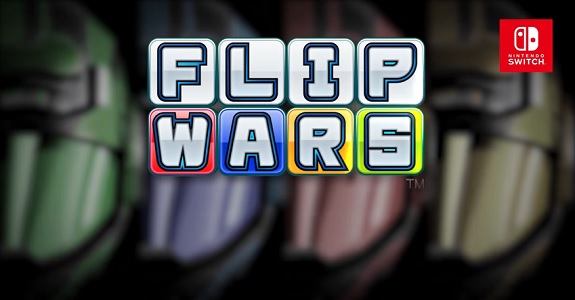 Remember Project Mekuru / Battle Sports Mekuru, that colourful-looking game with Mii, first seen in the Software reel during the Nintendo Switch Presentation 2017 in January? Well, that game came out a few weeks ago in Japan (and even got an update already), and it will be available in Europe… this Thursday! It’s even getting a new title for its western release: Flip Wars.

This game could be best described as a panel switch version of Bomberman. The main goal of the game is to perform “hip drop” on panel in order to flip them in your colour, and send flying opponents standing on them.

There’s several stages to choose from, and they all come with their own gimmicks that spice things up a fair bit. Here’s two examples:

Naturally, if you want to win, you have to not only get used to those gimmicks, but also use them to your advantage. To spice things up even more, you can use various items: one of them allows you to become invicible for a few seconds, while another increases your speed (useful to dodge attacks).

Flip Wars is a multiplayer game for up to players, that can be played either via local wireless or via online. There’s several game modes for you to choose from:

Flip Wars (Switch – eShop) will be released on July 6th in Europe, and this Summer in North America (do note that a simultaneous is more than likely, but nothing has been announced for North America yet). The Upcoming Releases page has been updated!