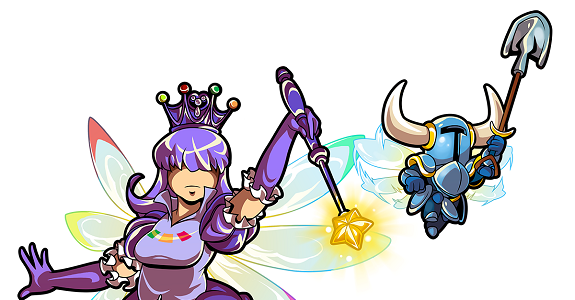 Since the Nintendo Switch is compatible with amiibo (not matter the controller you use), it does make sense that amiibo features from a previous version of a game is kept in the Nintendo Switch version. And naturally, it’s the case of the Shovel Knight amiibo, in Treasure Trove and Specter of Torment on Nintendo Switch.

The amiibo will do the following:

There’s one major difference, though: you will no longer need the amiibo for co-op, since it’s included in the free Software update launching alongside the Specter of Torment expansion.

And to compensate for the “removal” of the co-op feature, Yacht Club Games decided to add a little something for amiibo users… Madame Meeber! It’s a new character you can find in Potionarium, the Village, and even the Tower of Fate. Thanks to her, you can summon the Fairy of Shovelry, that will accompany you on your journey.

That shovellin’ lil’ fairy will accompany you no matter which character you’re playing with (Shovel Knight, Plague Knight, or even Specter Knight). It’s always digging for treasure, trying to battle enemies, and cheer you, but he doesn’t get in your way or mess with your gameplay. You simply will feel less lonely on your adventure!

And the best thing? This feature is not a Nintendo Switch exclusive: it will come to the Nintendo 3DS and Wii U versions of Shovel Knight alongside the Treasure Trove update, in April.

Here’s an artwork of Madame Meeber:

Click here for more details, and some GIFs of this new amiibo feature!

Also, yesterday, Yacht Club Games shared some more details about the Body Swap feature, coming soon to Shovel Knight. It was originally supposed to “only” let players swap the gender of the various characters, but it’s actually going to be more than that.

Thanks to this feature, players will be able to:

For more details about the Body Swap mode, including how it was designed, why the developers decided to include it in the first place, along with some concept-art, make sure to check out the blog post over at Polygon!

Shovel Knight: Treasure Trove and Specter of Torment (Switch – eShop) will be released on March 3rd, in Europe and North America. The Wii U and Nintendo 3DS releases will follow in April!