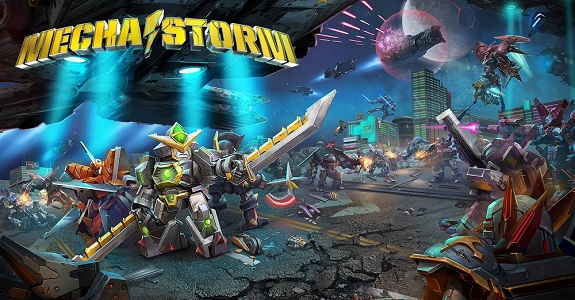 Earlier this week, Kongregate and Double Stallion announced that Speed Brawl (a stylish, anime-inspired 2D combat-racer) was headed to the Nintendo Switch this Summer. Here’s all you need to know about the game:

Speed Brawl throws players into a balletic symphony of lightning-quick combat through the dank locales of a dystopian London in an all-out bloodsport. Filled with armored brutes, vicious aliens, and outlandish bosses, the world of Speed Brawl captures the humor and over-the-top action from over three decades of cult classic cinema.

The fast and hard-hitting combat in Speed Brawl forces players to maintain momentum while judiciously managing the available energy used to unleash powerful special moves.
Players can upgrade and customize their tag-team of fighters through the acquisition of equipment and unlocking new and improved skills.

The game’s campaign can be played as a single or cooperative multiplayer experience the whole way through, both local and online. Furthermore, players can race their friends and players around the world for the best times across the game’s event leaderboards. The environment is furnished with a collection of physics-based contraptions and interactable objects like poles, explosive barrels, boost pads, and deadly circular saws that players can use to dispatch enemies in new and increasingly flashy ways.

Speed Brawl (Swithc – eShop) will be released this Summer in Europe and North America. The Upcoming Games page has been updated!

Earlier this week, ENP Games announced they were bringing their very first console game, Mecha Storm, to the Nintendo Switch. It will be released on May 25th in Europe and North America, and will cost 19.99€ / $19.99.

In full 3D graphics, Mecha Storm is an action-packed third-person RPG that invites players to strap into large mech units and battle it out in mech vs mech combat. Players will have to strategically utilize different mech types and upgrades to claim victory in over 50 fast-paced battles that take place on alien worlds. Players get to customize their teams, and swap in and out their mech units during battle to defeat the enemy and save the galaxy.

Mecha Storm (Switch – eShop) comes out on May 25th in Europe and North America. The Upcoming Games page has been updated!

Earlier this week, eastasiasoft announced that Lost Sea (an explorative action-adventure game) will be released on May 31st worldwide. The Nintendo Switch version includes all the updates from the other releases, and even features a more beginner-friendly difficulty level. The game costs 9.99€ / $9.99 / 980 Yen, and is currently available for pre-purchase on the Nintendo eShop.

Lost Sea is an explorative action-adventure game set inside the perilous environment of the Bermuda Triangle. Select your hero and recruit a ragtag crew of survivors who can help you navigate the hazardous island chain. Scour each island for the mysterious tablets you need to navigate the waters of the Lost Sea and venture closer to the mysterious portal, that you hope, will transport you home.

Lost Sea (Switch – eShop) comes out on May 31st worldwide. The Upcoming Games page has been updated!

Yesterday, Circle Ent. and Something Classic Games announced that Shadows of Adam was headed to the Nintendo Switch. No release date yet, but we do have plenty of details for it:

Tucked away from the outside world by the impenetrable haze of the Misty Woods, the village of Adam has mostly lived in peace since the days of the Wraith War. Magic, the dark power that fueled that war has vanished. But darkness is descending once more and Adam’s legendary hero, Orazio, is no more.

10 years ago he left without explanation and never returned, leaving his son and adopted daughter to wrestle with the dark secret he left behind—a secret that must now be revealed if the children hope to save both Adam and their departed father, though its revelation could unhinge the world.

Shadows of Adam (Switch – eShop) does not have a release date yet. The Upcoming Games page has been updated!

Via the official website, Spike-Chunsoft has detailed the two DLC that will be released for PixelJunk Monsters:

PixelJunk Monsters 2 (Switch – eShop) comes out on May 24th in Japan, and May 25th in Europe and North America. The Upcoming Games page has been updated!

Making some progress today on Hex Gambit's single player arena. Learn all about the game and join our beta here: https://t.co/K9hQ8qWj36 pic.twitter.com/gSKFWwkkGz

Earlier today, Score Studios shared some early details about the next Piczle game, and revealed that it will have a proper story. It will be told in a “classic style”, through a “hand-scripted data-driven system”.

Here’s a video clip showing that system (with placeholder assets):