In this week’s issue, Famitsu has a 4 pages article about Splatoon. Various enemies are showcased (from strongest to weakest): 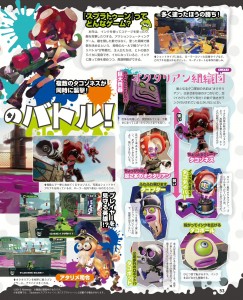 – Giant Weapon (Japanese name): it’s an enemy that was shown in the Hero mode trailer. It’s a giant box that has some little Octarian legs, and will try to crush you under its weight;

– Octolings: the Octarians’ equivalent of the Inklings. They possess the same set of skills;

– Divers: they wear masks, which allow them to swim in the ink;

– Octocopters: thanks to the propeller on their head, they can float in the air (which makes them hard to hit);

– Octoballs: they haveone lone eye, and they move around spreading ink everywhere;

– Octopods: small, robot-like enemies, which chase you around and try to cover you with ink by exploding near you;

Famitsu magazine also got some more info on ink, which is very useful to move around in the levels. For example, pools of inks allow you to make a super jump while you’re in squid form. You can also use ink to power up some propellers, in order to make some platforms move around. There’s also some strange devices that allow you to create some sort of “ropes” if you shoot them with ink: you can then use them to reach very high places that you can’t reach on your own while in human form.

Finally, one interesting tidbit about one of the levels of the game, called Octo Valley: in the background, you can see a giant structure shaped like an octopus on the cliffs.