Every year, The Pokémon Company offers some Pokémon distributions via Pokémon Bank, its service that allows players to store Pokémon in the clouds (pretty handy to transfer them between generations). The goal is obviously to make sure people keep their subscription going.

This year, the distribution features the following Pokémon:

Unfortunately, there’s nothing special about those Pokémon, other than their having their Hidden Ability.

As usual, you can find more details about the various Pokémon distributions for Pokémon Sun and Moon and Pokémon Ultra Sun and Ultra Moon on this page and this page respectively.

Nintendo of America have announced that the Nintendo Switch bundle with Pokémon: Let’s Go, Pikachu! / Let’s Go, Eevee! is back in stores in the United States. If you missed it during the holiday season, last year, now is your chance to get it. It does include a special dock and unique Joy-Con colours not available for purchase anywhere else. 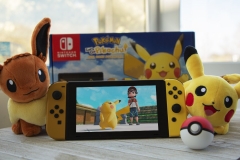