SEGA Ages Puyo Puyo (Switch – eShop) still does not have a release date in Europe and North America.

Yesterday, Capcom shared the latest Character Profile for Phoenix Wright: Ace Attorney Trilogy. It introduces the whip-happy Franziska von Karma, who makes her appearance in Phoenix Wright: Justice for All. Click here to check it out! 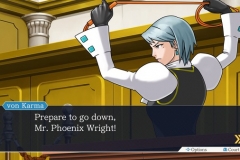 Heads up for players interested in Super Phantom Cat: Remake: a demo version is now available for download on the Nintendo eShop in Japan. It should be available later today in Europe and North America.

Last week, Super Real Mahjong PV was pulled from the Nintendo eShop in Japan, due to insufficient censoring in some scenes. Today, a Software update was released (Ver. 1.0.1), which fixes this issue, and allowed for the game to become available for purchase on the Nintendo eShop again.

Here’s the latest video clip for Shakedown Hawaii, which has been sent to lotcheck on Nintendo Switch:

As announced a few weeks ago, Bandai-Namco is planning to discontinue Lost Reavers later this year. Starting today, you can no longer purchase any items in-game, though of course, you can still use those you have already bought. Service will be fully discontinued on May 30th.