Every year, fans who go see the latest Pokémon movie in Japan can usually get two Pokémon via special distributions: one via pre-purchasing of tickets, and one directly at the theatre. Naturally, Pokémon The Movie: Mewtwo Strike Back Evolution is no exception, and in fact, the latest issue of CoroCoro magazine shares details about one of the distributions.

Starting on April 12th, fans will be able to pre-purchase tickets for the movie in Japan. They cost 1 400 Yen and 800 Yen, and come with a Serial Code to be redeemed in Pokémon: Let’s Go, Pikachu! / Let’s Go, Eevee! in order to get Mewtwo. Unfortunately, we don’t know if there’s anything special about this Pokémon, other than it will have a CP of 10 000.

You can find more details about the various Pokémon distributions for Pokémon: Let’s Go, Pikachu! / Let’s Go, Eevee! on this page!

The Pokémon Company has revealed the second promotional card for the Detective Pikachu set for the Pokémon Trading Card Game. It features Psyduck, and just like the first one, it will be available for free at select retailers. 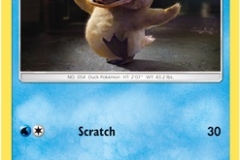 Not all Pokémon TCG cards capture the image of pure joy as well as this adorable Psyduck. It’s strutting its stuff and proclaiming its boundless happiness to all who chance to look upon it. Just watch out—any Pokémon that gets on Psyduck’s bad side will fall victim to its Scratch attack!

The Detective Pikachu set for the Pokémon Trading Card Game launches on March 29th in Europe, and April 5th in North America.

The Pokémon Company was supposed to announce the results of the latest Battle Competition for Pokémon Ultra Sun and Ultra Moon, the 2019 International Challenge February, today, but this was delayed following major issues with the Pokémon Global Link. As a result, the Shiny Tapu Bulu distribution, for players who took part in the Battle Competition, was also delayed to an unspecified date.

You can find more details about the various Pokémon distribution for Pokémon Ultra Sun and Ultra Moon on this page!