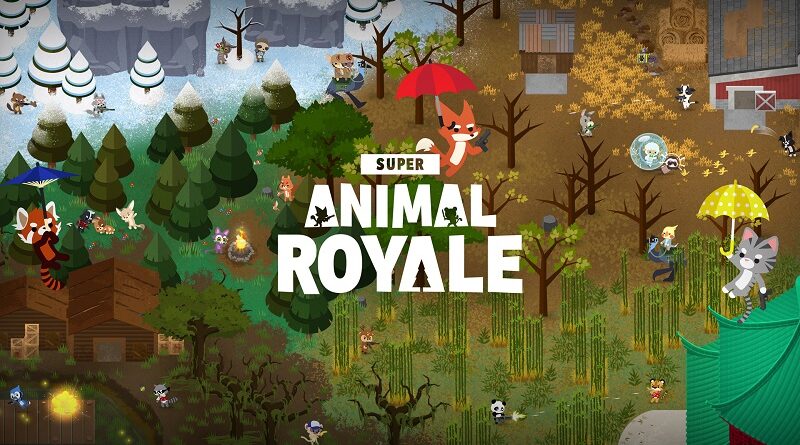 On this page, you will find all there is to know about the various Software updates for Super Animal Royale on Nintendo Switch (originally released on August 26th 2021 in Europe and North America)!

Super Eagle eyed players will have noticed that Thomas Sledison has been hard at work on an explosive new weapon, but the final form that has hatched in his workshop might not be what you eggspected…

The Big Clucking Gun (BCG) is a grenade launcher style weapon that shoots eggs that bounce off walls and explode on impact with enemies.

Note: the BCG is disabled in the “One Hit Kill” Mystery Mode.

Year of the Super Tiger Event

There’s also 16 returning legacy items from previous years, and you’ll be able to redeem red envelopes to collect each of these too until you own them all! Be sure to also check out Carl’s Cart during the event for some additional legacy items.

Year of the Super Tiger Breeds

To celebrate their lunar year, 4 new Super Tiger breeds are also arriving as permanent additions to the Research Lab:

S.A.W. Bamboo Resort has been updated for the Year of the Super Tiger!

Adopt 4 new mini pets from the Pets tab of the S.A.W. Shop!

The Shop tab in the main menu now displays an exclamation mark whenever new items have rotated in, and you’ll want to make sure to keep an eye on it around the update for all the new items! Some new items you’ll see rotating into the S.A.W. Shop include:

Cupid’s Bow will also be returning on February 12th for 96 hours (we’re giving it two 48hr slots back to back so you have a bit of extra time to grab it for Duos Day)!

In addition to purchasing a full bundle at the discounted price, if you only like one or two items in a bundle you now also have the option to purchase individual items from the bundle at regular price. Just click on the bundle and navigate to any item within it!

Because of this new feature, bundle items won’t be rotating through the shop in individual slots anymore, they’ll just be accessible from their bundle whenever it’s available. As always, if you own any individual items from a bundle, you’ll still be able to purchase the rest of the bundle together at a discount to complete your set.

We’ve made a bunch of key refinements to gameplay in this patch, and the first one is one we think a lot of you will be happy to see: an update that makes hamster ball kills feel a whole lot better whether you’re the one getting the kill or on the receiving end.

Season 2 will last roughly three months and during that time you can unlock the pass for the discounted price of 550 S.A.W. Tickets. After that, it’ll move into the Archive for 750 tickets. As always, once you own it, you can take as long as you need to complete it, and when you own any Animal Pass from the archive you can make progress on up to two at once (including the current season’s pass) for double the earning. No more FOMO or rushing to complete passes!

Season 1 has now moved into the Archive, but if you already own it you can activate it on your second track to keep working on it, or purchase it if you missed it! We also made some improvements to controller navigation of the Animal Pass screen, and made button selection styles clearer.

A new season also means a new Starter Pack DLC! Grab it while it’s available for the next ~3 months for a great deal on S.A.W. Tickets and exclusive cosmetic items and animal breed:

Season 1’s Starter Pack DLC will go away on December 20th, so it’s your last chance to grab it now if you don’t have it yet!

It’s CRISPRmas, Super Animals! The time of year when all Super Animals come together to celebrate the miracle of ethically dubious gene editing! And what better way to celebrate the cavalier rewriting of life’s sacred code than collecting the candy canes scattered around the island and redeeming them for 8 new limited-time CRISPRmas cosmetic items:

17 legacy CRISPRmas items also make their return and can be redeemed with candy canes. Make sure to also check out the S.A.W. Shop and Carl’s Cart during the event for additional holiday items.

Note: The older versions of these breeds are still available and have been renamed Super White Fox and Super Rudolph. As always, the new breeds are permanent additions to the Research Lab, so you don’t need to rush to earn them during the event!

We’ve also added a leaderboard for the top 10 players collecting candy canes, for bragging rights. The leaderboard is hidden by default, but you can see who’s the candy caniest by pressing the white leaderboard button in the top right of the event window. Note that the amount displayed includes the total candy canes earned at the end of each match (not just from collecting them off the ground).

The Cluckles outbreak continues: play The Bwoking Dead for the entire 3 week duration of the CRISPRmas event! Round up a squad of friends and try to survive the zombie chicken apocalypse and escape the island on a Giant Eagle. You can check out a full rundown on the mode in our previous patch notes here.

Home to the island’s renowned (and only) general contracting company, Beaver Construction HQ is a hive of busy busy activity between the royales, and makes a dam good spot for gunfights during them. The sprawling complex is built along the river, like a traditional beaver lodge, with three crossable dams connecting the two main buildings, and a water-entry den that serves as the foreman’s (er…forebeaver’s) office.

Other details worth seeking out include the “Three Busy Beavers” lobby statue depicting the legendary founders of Beaver Construction, the lumber mill that feeds all the company’s projects…and some of their employees, the Emu cart loading dock, the vending machines selling choice cuts of fresh wood, a scale model of the Super Animal Super Stage, and a few stashed Lunar New Year statues taking their twelve-year timeouts.

The beleaguered Beaver Construction workers who once labored tirelessly to build Super Animal World, and now labor thanklessly to clean it up after every messy battle, are ready to make their own messes. As seen on the latest episode of SAR Tonight, the Super Beavers are finally stepping out from their backstage roles and joining the fray!

To start, there’s three breeds that can be created in the Research Lab starting at Level 40:

Squad up With Friends on Any Platform

You can now invite your friends to squad up with you regardless of which platform they’re playing on! Cross-play party invites generate a 4 digit code that your friends can enter to join your party (and there’s also a handy button to copy it to your clipboard to help with sharing it with them).

So whether you and your friends are playing on Steam, Xbox, PlayStation, Nintendo Switch, or GeForce Now, you’ll be able to squad up with any combination of platforms. The PlayStation version of SAR also no longer requires PlayStation Plus to play!

We’ve also added the ability for hosts to be able to kick players from the group if necessary, and this applies to both cross-play and same-platform parties.

We previously added bundle sales to the S.A.W. Shop, and we’re continuing to add more of them (watch the S.A.W. Shop the week of December 28th for a new one), but now we’ll also be having sales on individual items! To start, we’re planning on discounting items that you’ll be familiar with and have already rotated through the shop a few times. If you boot up the game when the update arrives you’ll already see some individual item sales and they’ll continue to rotate in and out over the next few weeks!

Be sure to keep an eye on the S.A.W. Shop during the CRISPRmas event too, as we’ll be rotating in new featured items for the holidays each week.

Something has gone terribly wrong in Dr. Dogna’s Lab Lab, and animals infected with The Cluckles are turning into zombie-like Joe Clucks. Survivors must try to avoid getting infected and stay alive long enough to escape the island on a Giant Eagle. Zombies Joes continuously respawn and try to infect all survivors before they can escape.

Candy corn is back to collect and redeem for new & legacy event-specific cosmetics! Find candy corn around the map and also earn it based on your survival time until the event ends on November 9th at 11:59pm PDT.

19 legacy cosmetics (from 2019 and 2020) also return for the event, and some additional legacy Howloween items will appear Carl’s Cart during the event.

Several new S.A.W Shop items will also be debuting during the event:

Lastly, there’s a new Super Horse and Super Skullcat breed to create in the Research Lab:

Unlike the rest of the Howloween items, the animals are permanent additions to the game!

The old S.A.W. Shipyards have been replaced by the new “Pixile Port” point of interest on the island. Explore and fight between large cranes, warehouses, offices, and shipping containers. There’s also a new lighthouse to visit to the south of the port.

In addition to Pixile Port, SMOMA has been updated to feature the artwork of the winners of the most recent art contest! You can view all the art on our website as well right here.

How to download updates for Super Animal Royale for the Nintendo Switch?

To download the updates for Super Animal Royale, you have three options: