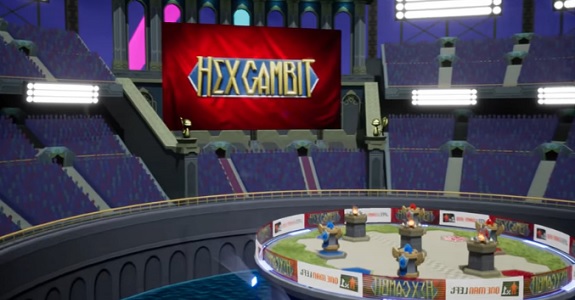 Less than a week ago, the Kickstarter campaign was launched, and it’s already successful: over $11 000 have been pledged! That means it’s time for the second part of the campaign… the stretch goals! The first one is at $15 000, and it’s for the House Rules.

Here’s what the House Rules entail:

For more details about the Kickstarter campaign, click here!

Hex Gambit (Switch – eShop) should be released in April 2018 in Europe and North America.

Last week, the web eShop page for Chicken Wiggle went live in North America. Unfortunately, it doesn’t list the release date, but at least, it does have a few screenshots!

Here’s the latest video clip for Retro City Rampage DX, which comes out on Nintendo Switch this Thursday (August 3rd) in Europe and North America!

"When a coil is operated with currents of very high frequency, beautiful brush effects may be produced." Nikola Tesla #screenshotsaturday pic.twitter.com/DMUILagRHz

Unfortunately, The Unlikely Legend of Rusty Pup (Switch, 3DS – eShop) does not have a release date yet.

Taking in the village scenery in #SneakyNinja. It's peaceful when Samurai aren't trying to kill you! #screenshotsaturday #indiedev #WiiU pic.twitter.com/DThal7CpGa

Yesterday, Red Column shared some more details about the upcoming update for 3Souls. First, we have a few screenshots that show the “new” backgrounds for the system menus, that are now more detailed:

Also, since the developers are ditching the episoc format (Episode 2 and 3 are being added to the game as part of the free update), 3Souls will instead become a stand-alone game. Each part of the game is referred to as a chapter, and you can choose which chapter to play once you have finished the full game. That way, you will be able to easily go back to a chapter in order to find a collectible you’ve missed, for example.

Yesterday, Yacht Club Games published a pretty lenghty blog post about Shovel Knight, and more precise the Shovel Knight. Called “Specter Knight Mobility Design”, it goes over how they created the Specter Knight not just as a character, but also as gameplay-wise.

From the outset of development on Shovel Knight: Specter of Torment we had a couple of concrete goals and ideas. We wanted to go bigger and better than our previous effort, Shovel Knight: Plague of Shadows, and make Specter’s campaign even more unique and varied. We wanted to tell a more serious story with some creepier overtones. Most of all, we wanted to center the game around a truly cool character. Specter Knight was always supposed to be a “tragic but awesome” kind of guy, and we wanted to drive the point home every way we could. When crafting Specter Knight’s mobility, embodying these themes was most important.

Impressions from Plague of Shadows itself was also a huge influence on Specter of Torment! Reception to the alchemist’s maniacal moves… well, they certainly got a reaction! Some people hated how Plague Knight flew all over the place (usually into a pit!), while many warmed up to the explosive trickster after some practice. At Yacht Club, we love the subtlety and possibilities found in Plague Knight’s crazy mobility set, but we saw a lot of frustration too. For Specter Knight, we resolved to create more streamlined and intuitive controls with a lower execution barrier- a playstyle that was in between steadfast Shovel Knight and frantic Plague Knight.

Over the past couple of days, the latest two devblog post for the Nintendo Switch version of Kid Tripp were posted. If you’re interested, click on the link below to check them out:

Here’s some screenshots and a trailer for Cube Life: Pixel Action Heroes on Wii U, releasing on August 9th in Japan (price: 500 Yen):