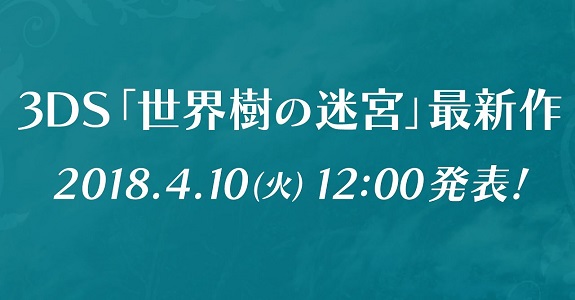 It’s already April, the 4th month of 2018, and most publishers have moved on from the Nintendo 3DS in favour of other, more modern platforms (including the Nintendo Switch, of course). But for Atlus, the little handheld isn’t quite dead yet: they still have some games coming for it, including Persona Q2 (announced a few months ago), but also a new game in the Etrian Odyssey series.

And that new Etrian Odyssey game will be revealed next week, on April 10th, during a special (and extremely short) livestream on YouTube. The presentation is expected to last about 4 minutes, which implies Atlus is simply going to “livestream” the announcement trailer.

The livestream will take place on April 10th at the following time:

You will be able to watch it on Periscope or on YouTube:

Unfortunately, we don’t know anything about this new Etrian Odyssey game for the Nintendo 3DS, other than… it will be on Nintendo 3DS. It’s too early for a new mainline entry (the 5th entry was released back in 2016 after all), and Atlus has previously described it as a “festival” game celebrating the series. They have also confirmed it was not Etrian Odyssey Untold 3.

Since the reveal is taking place on Tuesday, it’s basically guaranteed this mysterious game will be featured in the latest issue of Famitsu magazine (releasing on Thursday), which means we’re bound to get additional details pretty quickly (thanks to the usual leaks). And given past reveals from Atlus, the game may very well be showcased during a livestream, over the week-end.