Today, the latest Kickstarter update for Kingdom of Night went live, and it’s another Spotlight blog post. This one is about the Town of Watford, with details about places to be found there, but also some of the people living in that town. Click here to learn more about it!

Kingdom of Night (Switch – eShop) should come out in October 2020 worldwide.

The next Software update for Brawlhalla will be released on Monday, and the developers have shared a montage from the latest Dev Stream, showcasing the new taunt and colours to be added as part of this update:

Vblank Entertainment have announced that the upcoming Software update for Shakedown Hawaii will a pretty handy feature: a “Buy All (available)” Multipliers button! Here’s a screenshot: 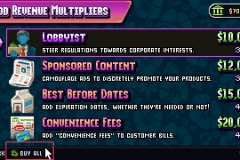 Devolver Digital have announced that their E3 press conference will take place on June 9th/10th at the following times:

As usual, it will be livestreamed on Twitch.

Creaturesin the Well (Switch – eShop) comes out this Summer in Europe and North America.

Today, a new Software update for Dawn of the Breakers was released: check out this page for all the details about it!

As compensation for the maintenance that took place, players who created their account by May 9th (before the maintenance began) can now claim the following as special Log-in Bonus:

You have until June 7th to claim your present!