GRIS has won the heart of many players since its release, on December 13th. If the Soundtrack is one of the reasons the game resonated with you, you will be glad to know that it’s now available for purchase on several digital storefronts and streaming services:

The magazine reveals that it sold pretty decently, with 27 700 units across the 3 platforms it was “released” on during the first 2 weeks (until December 2nd). The Nintendo Switch version sold about 1/3 of the PlayStation 4 version, with 6 500 units (over 5 times what the game sold on Xbox One).

This is a pretty decent performance, given Fortnite is already available for free on the Nintendo eShop (though of course this retail version comes with some extras, despite not including a game cart).

Today, Flyhigh Works announced that they will release Alwa’s Awakening on January 10th in Japan. It will cost 1 000 Yen, and will be available for pre-purchase from December 27th.

Alwa’s Awakening (Switch – eShop) comes out on January 10th in Japan. The Upcoming Games page has been updated!

Here’s the latest screenshot and character profile for Double Cross: 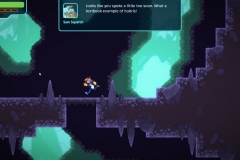 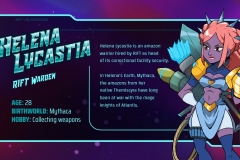 Here’s the latest video clip for Treasure Stack, showing the original prototype and comparing it with the “final” version of the game:

Treasure Stack (Switch – eShop) comes out in Q1 2019 in Europe and North America.