Here’s the latest making of video for Trine 4: The Nightmare Prince:

Sit down with the Writer, Art Director, Producer, and Vice President of Frozenbyte to go behind-the-scenes of Trine 4’s art and story. See never-before-seen footage from inside the Frozenbyte Studio, learn about the overarching story of the Trine series, and discover the inspirations behind the art direction of Trine 4 – both from within the game, and the Finnish nature that inspired the world you’ll see on October 8. What you’ll see – concept art from the various Trine games, in-studio footage of artists’ work-in-progress, first looks at two Trine 4 boss battles, and real-world Finnish flora and fauna that inspired the newest Trine game.

Trine 4: The Nightmare Prince (Switch) comes out on October 8th in Europe and North America, and October 10th in Japan.

Here’s the latest making of video for Blacksad: Under the Skin:

While the first making-of video, released a few weeks ago, gave more information about the comic book’s world, along with work by Pendulo’s teams to bring Juan Díaz Canales and Juanjo Guarnido’s creation to life as a video game. This new chapter, you’ll find out what motivated the teams to embark on this adventure, along with the challenges they faced during the game’s creation, including the need to reflect the comic book’s original spirit. This new making-of also includes new and exclusive footage, showing how the characters were animated and the role played by the game’s music. You’ll learn about the teams’ collaboration with Inon Zur; the composer behind world class tracks for games like Syberia, Fallout, Dragon Age and Prince of Persia!

Blacksad: Under the Skin (Switch) comes out on November 5th in Europe and North America.

Here’s the latest trailer for Stranded Sails – Explorers of the Cursed Islands:

Here’s the reveal trailer for The Bradwell Conspiracy:

The Bradwell Conspiracy (Switch – eShop) comes out this Fall in Europe and North America.

Welcome to the glorious world of Munchkin, where those daring enough among you will defy the best wishes of your party and friends to become THE ULTIMATE! If you are someone who would backstab your allies to claim that epic new item, then Munchkin: Quacked Quest is the game for you…

Here’s the latest videos for Ninja Box, including the latest episode of the official web anime series:

Kogado Studio have announced that Yumeutsutsu Re:Master is getting additional story content via DLC, in February. It’s called Yumeutsutsu Re:After, and it will be released in February in Japan. On the same day, the game will finally be released at retail on Nintendo Switch, with a package including both the base game and the story DLC. 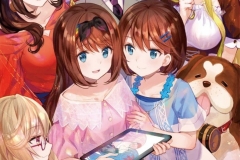 Yumeutsutsu Re:Master (Switch) and the story DLC come out in February 2020 in Japan. The Upcoming Games page has been updated!

Natsume have announced that Harvest Moon: Mad Dash will be released on October 29th in North America. Here’s a trailer for it:

Harvest Moon: Mad Dash (Switch) comes out on October 29th in North America, and this November in Europe. The Upcoming Games page has been updated!