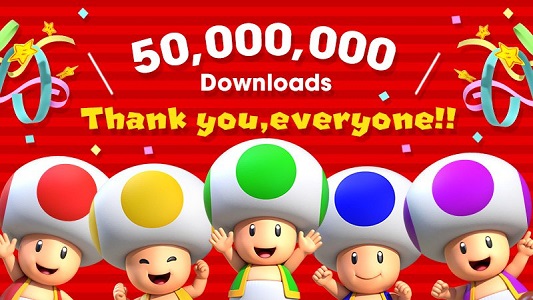 Earlier this week, Nintendo sent a press release to announce that Super Mario Run has been download over 40 million times in 4 days: a rather incredible performance, that set a new record for the App Store (one that most likely will not be beaten any time soon). And that’s only for the iOS version, as the Android still doesn’t have a release date…

And naturally, this is just the beginning: there’s no doubt the game will be downloaded by million of additional players in the upcoming weeks and months. In fact, the download rate doesn’t seem to have slowed down all that much, since Nintendo announced today that Super Mario Run had reached 50 million downloads worldwide.

To celebrate, Nintendo is holding a special giveaway: all players get 10 “free” Toad Rally tickets. We say “free” because said tickets are already free (you cannot buy them using real money). Nintendo specifies that when you receive your gift, you have to restart the app, and it will then appear in your gift box.

Also, Nintendo uploaded a new promo video for Super Mario Run, called “Do You Know Mario”. It’s a pretty neat video that shares some basic detail about the Super Mario series: it introduces the characters, Mario’s abilities, the different genres of Mario games (platform, racing, sports, etc.), and more. Naturally, if you’ve been playing Mario games for a long time, this video will not reveal anything new to you (no neat trivia or anything)!

Super Mario Run will be released on Android sometime next year (in 2017).