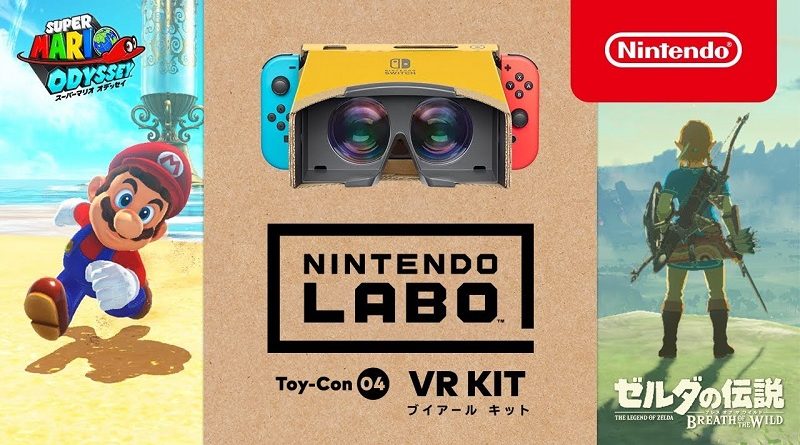 Next week, the latest Nintendo Labo set, the Nintendo Labo Toy-Con 04: VR Kit will be released worldwide. It will bring the very first VR experience to the Nintendo Switch via the main Toy-Con of the kit: the Toy-Con VR Goggles.

Many players wondered whether additional games would be updated to add VR support following the release of the VR Kit (just like Toy-Con Piano support was added to Deemo, and the Toy-Con Car + Pedal + Key can now be used in Mario Kart 8 Deluxe), and the answer is yes!

Nintendo have announced that two games will get support for VR on April 25th (North America) / April 26th (Europe, Japan): Super Mario Odyssey and The Legend of Zelda: Breath of the Wild!

Super Mario Odyssey will not be fully playable in VR. Instead, players will be able to enjoy a bite-size bonus experience, said to be simple and family-friendly. Three new mini missions will be added, tasking the player with collecting music notes and coins in order to complete objectives. You will also be able to revisit specific Kingdoms: the Cap Kingdom, the Seaside Kingdom, and the Luncheon Kingdom. There’s also a movie theatre, allowing players to watch some of the cutscenes in VR.

Nintendo have confirmed that the extra content will be playable even without the Toy-Con VR Goggle.

Details about the Software update for this game will be added to this page as soon as they’re available.

Unlike Super Mario Odyssey, The Legend of Zelda: Breath of the Wild will be fully playable in VR, with one exception: pre-rendered cutscenes. You will be able to (re-)discover Hyrule in VR, and all you have to do is activate (or deactivate) the option from the Options screen. Even better: you will be able to use an existing save file, without have to start a new game!

Details about the Software update for this game will be added to this page as soon as they’re available.