Here’s a promo video for the game:

And the boxart, featuring Christian Yelich: 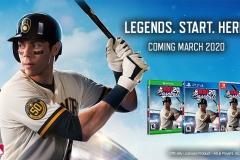 R.B.I. Baseball 20 (Switch) comes out in March 2020 worldwide. The Upcoming Games page has been updated!

A DevBlog post for Cris Tales is now available, and it reveals a brand new area of the game: Saint Clarity! Click here to check it out.

Cris Tales (Switch – eShop) does not have a release date yet.

Venture back to the vibrant land of Etheria on a mission to stop the evil Old Ones’ time-traveling plot to undo the heroes’ hard-fought victories in the original Dungeon Defenders. Take up arms once again as a scrappy, young band of warriors, repelling relentless hordes of dark forces from beloved reimagined locations and explosive new battlefields. Join the fray in action-packed combat and construct devilish defenses, all while hatching strategies to vanquish enemies alone or as a team of up to four heroes in chaotic local or online co-op multiplayer matches!

With four characters (and more to come), Dungeon Defenders: Awakened features a variety of playstyles for dispatching orcs, ogres, dark elves, wyverns, spiders, skeletons, and other vicious foes. Go toe-to-toe with enemies as the brave, melee-oriented Squire or skirmish at range as the magical Apprentice. Provide support as the dynamic Monk or spring traps as the agile Huntress while guarding the Eternia Crystals across 15 maps and five game modes that hearken back to the series’ roots while building and improving upon them in every way.

Gather loot, upgrade equipment, acquire pets, and more to prepare for the fights to come, including showdowns with massive bosses spanning everything from dragons to goblin mechs. Each battle develops heroes with new gear and customization options, allowing them to form unique arsenals to enjoy across countless hours of fast-paced medieval fantasy action.

Starting today, Widget Satchel is available for pre-purchase on the Nintendo eShop. It costs $11.99, with a pre-purchase and launch discount available until December 6th.

Widget Satchel is a “Metroidvania-lite” where you play as a mischievous ferret on a space station. Sprocket is the name, and mildly inconveniencing humans is the game. With puzzles, platforming, collectibles, and gameplay that’s easy to pick up and play-but difficult to master-players will be able to replay Widget Satchel for years to come.

Curve Digital have announced that American Fugitive is getting another free update on November 25th, called State of Emergency. Here’s a trailer for it:

This free update will add the following to the game:

Rising crime levels in Redrock County has forced the army into action. The former plastic toys factory has been commandeered as a makeshift operating base and military vehicles and weapons have been deployed in an attempt to control the criminal element wreaking havoc in town. This is War. Hit the road in a military-grade Westmoreland Tank and go off-roading in an army 4×4 jeep, or take your new arsenal on foot blasting your enemies with a bazooka and wielding the destructive power of the mini-gun. The free update also includes 3 new achievements/trophies to unlock, as well as 3 new additions to the runaway soundtrack!

Here’s the launch trailer for Still There, now available in Europe and North America:

Today, the latest Software update for Brawlhalla was released: Ver. 3.52. Here’s the usual trailer showcasing the new elements and features: