Here’s a short preview of the new vocal song in Tokyo Mirage Sessions #FE Encore, “She is…”:

Bandai-Namco have announced that Naruto Shippuden: Ultimate Ninja Storm 4 Road to Boruto will be released on April 24th in Europe and North America, just one day after Japan.

Naruto Shippuden: Ultimate Ninja Storm 4 Road to Boruto (Switch) comes out on April 23rd in Japan, and April 24th in Europe and North America. The Upcoming Games page has been updated!

Bandai-Namco have announced that My Hero One’s Justice is getting a Collector’s Edition in Europe and North America. It costs $129.99, and it includes the following:

Also, players who already own the first game and have save date for it on their console will be able to unlock a special Izuku Midoriya customization item.

Microids have shared an official interview with Felipe Gómez Pinilla (CEO of Pendulo Studios) about the development of the game. Here’s an excerpt:

Indeed, Pendulo put to contribution the two Spanish authors of Blacksad. A collaboration as valuable as it is rewarding for developers, as Felipe explains it : “Working with Díaz Canales and Guarnido has been as easy as enriching. Microids had already submitted a preliminary synopsis, which they liked, and then left us work by ourselves. From time to time, we sent them new concepts, 3D models or dialogues, and their feedback was always accurate and enlightening. And although they asked us to change only small things, they helped us to capture the essence of the comics, because no one knows better than them the universe of Blacksad.”

Nintendo Minute is never a minute! Today we’re getting into the holiday shopping spirit by doing a fun challenge at Best Buy. We each take turns and carry as many Nintendo items as possible. The person with the highest dollar amount at the end wins! All the items we purchase will be donated to the Starlight Foundation so we hope it brings some joy this holiday season. As always, thank you so much for watching and we’ll see you next week!

Nintendo have announced that their annual holiday sale on the Nintendo eShop will go live on December 19th in Europe. It’s called Festive Offers, and it will have over 700 games on sale, with discounts going all the way to -80%. Of course, the Nintendo eShop Sales page will be updated with the new sale as soon as possible once the sale is live! 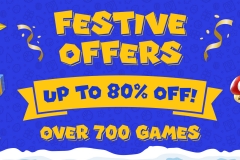