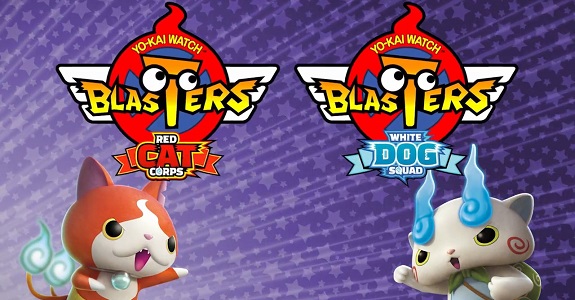 In the past few months, there’s been various signs and hints that Yo-kai Watch Blasters (known in Japan as Yo-kai Watch Busters) was headed to Europe and North America. And today, Nintendo finally announced that the game was indeed coming to those two regions, on September 7th to be precise. They will cost 39.99€ / £34.99 / $39.99.

For those of you who never heard of the game before, Yo-kai Watch Blasters is basically an expanded version of the multiplayer game from Yo-kai Watch 2. It’s now a full-fledged game, that allows you to play with three other friends via local wireless or online. There’s towering Big Bosses to tackle, skills to make use off, and powerful Soultimate Moves to pull off.

Unlike the mainline entries, this is an action-RPG where you get to control the Yo-kai directly. Of course, the lack of turn-based combat doesn’t mean there’s no more strategy involved: you still need to think carefully about which skills and pieces of equipment to use.There’s many different fast-paced missions to tackle, and no less than 400 new and returning Yo-kai to battle.

You also need to train your Yo-kai, as this affect your team’s strength in battle. Training also allows you to create items and equipement to use. After that, you can go tackle missions, where you can earn more powerful and useful items.

Also, if you already own Yo-kai Watch 2, you can link your save data and unlock an exclusive Yo-kai:

Finally, Nintendo reveals that the game will get a post-launch update, adding more side stories, Yo-kai, bosses, and missions. It’s most definitely the very same update that was released in December 2015 in Japan. Unfortunately, we don’t know when it will be released…

Yo-kai Watch Blasters (3DS) comes out on September 7th in Europe and North America. The Upcoming Games page has been updated!