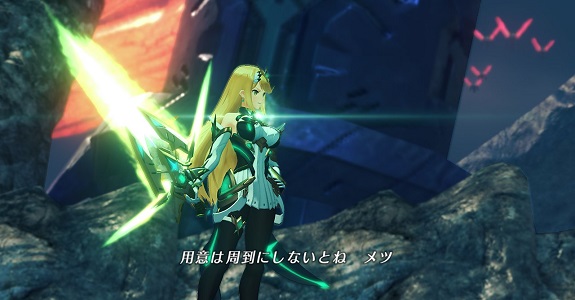 Now, you’re most likely wondering “What does this update do?”, and unfortunately Nintendo isn’t really helping because there are no official patch notes for it. However, Monolith Soft. has announced via Twitter that this update adds a brand new outfit for Mythra. This outfit is called Massive Melee Mythra, and it’s inspired by her modified outfit from Super Smash Bros. Ultimate.

Here’s what the outfit looks like (the second picture is from Super Smash Bros. Ultimate):

Wondering how to get the Massive Melee Mythra outfit? Don’t worry: there’s no need to complete any challenge in the Challenge Battle Mode (which would lock out all non-DLC players anyway). All you have to do is talk to a specific Nopon in the world.

Here’s what you have to do to get the outfit:

And that’s pretty much it! A quick note: like other costumes, the Massive Melee Mythra outfit is an Aux core.

But that’s not all for the Xenoblade Chronicles 2 1st Anniversary celebrations! It has also been announced that the Xenoblade Chronicles 2: Torna ~ The Golden Country Original Soundtrack will be released on December 14th worldwide. Unfortunately, it will only be available in digital format (no physical release this time around), on the following digital music storefronts:

The Xenoblade Chronicles 2: Torna ~ The Golden Country Original Soundtrack includes 11 tracks from the Story DLC, sold 200 Yen separately, and 2 000 Yen as part of the full album (no pricing for Europe / North America yet). By the way, if you purchase it on iTunes, you will get the Liner Notes for all 11 tracks (translated to English!).