Retailers are far from being reliable (though they are sometimes spot-on, as we saw recently with the Mighty No. 9 delay “leaked” by several US retailers), but the listing found yesterday by a reader of MyNintendoNews is too suspicious to ignore. According to the UK retailer GAME, The Walking Dead Combo Pack is coming soon to Wii U.

This combo pack would include:

Based on the placeholder date (October 30th), this collection would come out in October in Europe, and would cost “only” 29.99£. No doubt that we should get an official announcement in the upcoming weeks… provided this listing isn’t simply a mistake from one of GAME’s employees! 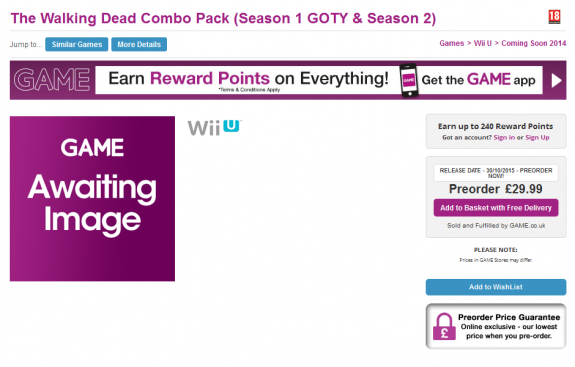 If this rumour proved to be true, this would be the first time in many years that a Telltale Games title gets a release on a Nintendo platform: the company released several of them on Wii, but none of them on Wii U so far.