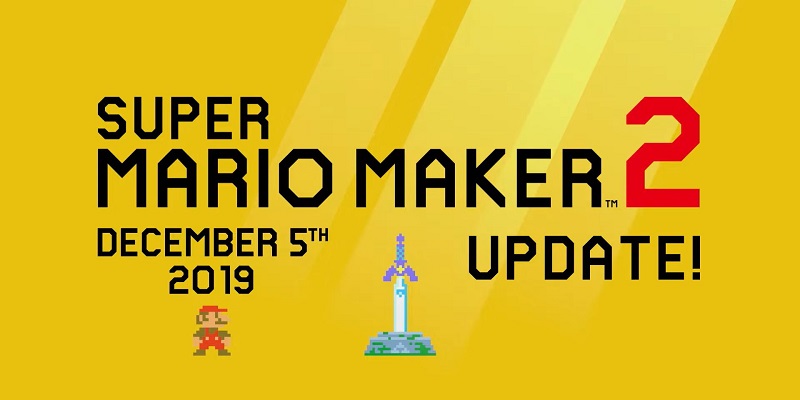 Super Mario Maker 2 was released back in June, but Nintendo have been pretty quiet on the update front. Since launch, there’s only been one update: Ver. 1.1.0, which adds the option to play online with friends. But it’s going to change this week, with the release of the second update, logically called Ver. 2.0., which brings a new game mode, new course parts, and even a brand new power-up!

That new power-up is none other than the Master Sword from The Legend of Zelda series, and it allows you to turn Mario into Link. The change isn’t just about his appearance, as the power-up allows you to use Link’s signature weapons and moves: you can use your sword to slash at enemies, raise up your shield to defend yourself, use the bow and arrow to shoot at things (in 3 directions), blow up blocks using bombs, etc..

Super Mario Maker 2 Ver. 2.0 also introduces a new game mode: Ninji Speedrun. This mode has you race across courses created by Nintendo specifically for this mode (with new ones distributed on a regular basis). The goal is, as the name implies, to finish them as fast as possible. The ghosts of other players competing show up in the courses as ninjis (selected from among players at a similar level than you).

By clearing courses, you can collect stamps, which are then used to unlock Mii costumes. There’s also another reward for top players: gold stars that circle around their Mii character for a limited time. By the way, while each event runs for about 1 level, the courses themselves remain available even after its event has ended.

Here’s a trailer and some screenshots for the new content included in Ver. 2.0:

The Ver. 2.0 update for Super Mario Maker 2 will be released on December 5th in Europe and Japan, and December 4th in North America (due to timezone differences).