ebten will offer a B2 (515×728mm) poster with all orders of the Splatoon Live in Makuhari -Squid Sisters Live- album:

Today is Splatoon’s very first Anniversary, and Nintendo has decided to celebrate it by making several announcements. First, there was a new Wii U Premium Pack, which was announced a few hours earlier. But it turns out Nintendo had more surprises in store! 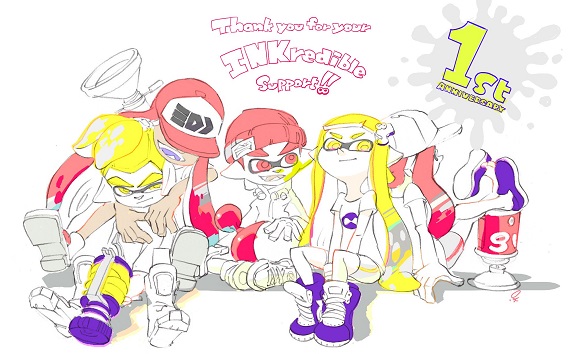 Remember the two live performances by the Squid Sisters, at the Game Party Japan in January, and at the NicoNico Choukagi event in April? Did you like them? If yes, you’re in luck: Nintendo announced that a Squid Sisters Live Album called “Splatoon Live in Makuhari – Squid Sister Live” would be released on July 13th in Japan, and would cost 2 700 Yen.

The album also includes the demo version of High-Color Sinker / City of Color, from the Splatune CD (original soundtrack). It will also come with a booklet, label, and jacket designed by the development team, featuring exclusive artworks drawn by Seita Inoue.

Today, the Squid Research Lab also announced that the Sheldon’s Picks Vol. 2 would be released next month, on June 8th. Unfortunately, we don’t quite know what weapons will be included this time around (though you can see them on the box below), but obviously, more details will be revealed in the upcoming days (including the patchnotes for the update).

Reminder: the CoroCoro collaboration gear will be included in the Sheldon’s Picks Vol. 2, though it’s not clear if Europe and North America will also get it.

Earlier today, Tower Records uploaded a rather intiguing commercial… it looks like something will happen there on June 24th. Is it related to the Splatoon Live in Makuhari -Squid Sisters Live- album, coming out in July?

Nintendo also announced some more merchandise, with some t-shirts, armbands, caps, tote bags, towels, badges, and more from EDITMODE (to be released in July):

Our Upcoming Releases page has been updated with the Splatoon Live in Makuhari -Squid Sisters, and the next Software update with the Sheldon’s Picks Vol. 2.

Finally, don’t forget that plenty of songs from Splatoon are available in Daigasso! Band Brothers P Debut in Japan (including the live version of some tracks):

If you’re interested, some Splatoon goodies are available on Play-Asia and CD Japan, such as the Splatoon playing cards, the diorama kits, and more! [NB: affiliate links]