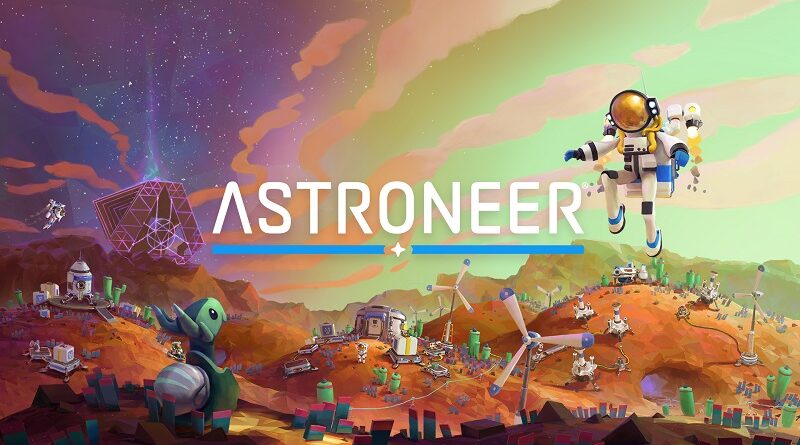 On this page, you will find all there is to know about the various updates for Astroneer on Nintendo Switch (originally released on January 13th 2022 in Europe, North America, and Japan)!

Per Astroneer[ERROR!#00] Protocol, recruits are expected to complete the following missions in preparation for this new endeavor:

Please consult your EXO-certified mission log to verify your completion of these missions.

Once [ERROR#%//HELP] has been completed, Fault Finder items can be crafted and deployed. Fault Finders which are activated and used to store a [ERROR//%!DENIED] can be used on the Trade Platform for the acquisition of extremely valuable or enjoyable items.

Wow! It’s been almost four years since 1.0… can you believe it?! This February, we’ve got a celebratory cosmetic to share with players, from our hearts to your head. Log in during the month of February to unlock exclusive cosmetic items!

Container wrecks have been spotted on Sylva, Desolo, Calidor, and Glacio surrounded by various toys and debris. Production-minded Astroneers can create fresh toys via the Small Printer using Scrap and other resources.

It is curious that shipping containers keep crash-landing on planets in the Sylva System around this time each year… what’s going on with EXO’s logistics department? Must be a weird glitch in their subroutines. Maybe that explains the weird containers ERROR//LU-C1D filtration at 63% HelpHelpHelp that have been reported on Sylva, Desolo, and Calidor.

Packaged toys are worth different point amounts when shipped:

EXO supplies useful items and resources along the way to boost your recovery or production efforts. Randomized recurring rewards are available after completing the main event including:

To support event-related communications, special missions have been added that will appear in the Mission Logs of players when a new event is active. Players only need to activate an EXO Request Platform rocket to start the current event and complete the mission.

As with previous years, all package points will go towards unlocking a global total that will grant everyone in the community a FEZANT hat! We will be tracking progress via social media so when you complete the event, you can continue sending rewards to help make sure the gift gets unlocked for everyone!

Multi-colored lights return to adorn the tether lines of intrepid Astroneers! Use them as decorations, in support of your construction projects, or simply enjoy their merry glow

A new vehicle(?) has been discovered in the wild! This curious contraption seems to be an evolution on EXO’s recreational line of enrichment items, ingeniously augmented with a gyro-stabilized control platform in its interior. While simplistic in its appearance, the Gravity Globe harnesses some of EXO’s most advanced technologies, allowing it to roll against gravity (within reason), and even perform small ‘hops’ to clear minor obstacles. Just like the more primitive Recreational Spheres, the Gravity Globe is an ideal enrichment activity for all Astroneers (and other sentient beings, where appropriate).

Gravity Globes can sometimes be found on EXO wreckage: most commonly on abandoned spaceports, but occasionally attached to derelict rover chassis (for what purpose remains unknown). They can additionally be acquired via the Trade Platform.

A new, rare crafting item has been added to boost refinement of valuable resources. This small item is extremely versatile and can be used to process nuggets on-the-go in your Backpack, to bootstrap a new base, or as part of an intricate automated production network.

Portable smelters can sometimes be found on EXO wreckage while exploring or can be acquired via the Trade Platform.

Something… new… has been observed appearing in Abandoned Backpacks found across planets in the Sylva System. It’s unclear exactly what has caused these objects to manifest; further information and experimentation are needed. Caution is advised when interacting with [ERROR!%&#HELPHELPHELP]

A new emote – “Dizzy” – has been added to the core game. This emote can be unlocked by [ERROR – REFERENCE MISSING] which can certainly make an Astroneer become dizzy!

It’s time again to gather hard-working Astroneers and band together for EXO Dynamics in the Fuel Acquisition, Renewal & Maintenance event! Sturdysquash are in season and can be farmed in bulk to be processed in Cauldrangea plants. Ship off the products to EXO for points and rewards!

Useful incremental rewards are included along the way to bolster your harvesting capabilities. Randomized recurring rewards are available after completing the event – including QT-RTGs & EXO Chips! – for those who want to continue to produce biofuels.

Railway Vehicles
The Catalog has been updated with two new vehicles custom-built for the Rails System. Railway vehicles can be used individually or chained together into trains up to six vehicles long. Just make sure you have enough power to run them; each vehicle in a train increases its power draw!

Rail Cars
Basic railway vehicle with a medium storage slot. Slower than Rail Engines, but can be chained together in either direction.

Rail Engines
Specialized railway vehicle used for personal transportation and faster trains. Provides a built-in seat, 2x small auxiliary slots,  and a headlight. Can only be placed on the front or back of a train.

Railway Items
Your new railway vehicles won’t do much good without rail lines to ride along! Fortunately, the Catalog has also been updated with a range of railway items for building out the rail network of your dreams.

Rail Posts (Standard & Tall)
The backbone of every rail line. Like tethers, they chain together automatically as they’re dropped. And don’t worry if you left your train back at base; the nearest train can be called to any rail post, at any time!

Automation
Updates and additions have been made to existing automation systems to take advantage of the Rails System.

Railway Items as Sensors
Rail Posts and Stations are equipped with reaction slots that activate in response to railway vehicles.

Railway Item Pin Slots
Rail Junctions are equipped with a pin slot for each of their three connections, giving you precise control over when each one is active.

Rail Station Pin Slots
Rail Stations are equipped with pin slots that will start a docked train moving in the desired direction.

We’re introducing a new Bundle available for all players as a one-time purchase.

The Automated Mass Production Protocol returns! Astroneers are asked to undertake the creation of large quantities of valuable resource nuggets to send off via the EXO Request Platform in exchange for useful goodies and stylish customizations.

EXO Dynamics has changed up the resource requests this year and upgraded their transfer rocket to accept any of the following resources for varying points (per nugget):

All Astroneers present are awarded points when a rocket is launched – cooperation is encouraged for efficiency!

Tether Toppers
Tether posts have been updated to get your automation vibes cranking – log in to experience these temporary decorations that are sure to turn heads!

This is a long time coming but we did a bunch of work to add (honestly..) basic functionality for controls across all platforms. You can now use mouse and keyboard on console and can remap a TON of inputs to completely customize your experience. We did this mainly for accessibility purposes, if you are a player who needs to move buttons around to make sure you can enjoy Astroneer, this one is for you <3. Of particular note, you can now make some “hold” actions a toggle to help make sure you can play with less need to hold multiple buttons down for long periods of time.

Additionally, adding Mouse and Keyboard support to console means people can use a variety of peripherals if they need. We tested a lot of hardware (thanks so much Q/A team <3) to ensure that you can remap lots of actions to any mouse button or any keyboard input. The team also tested these changes with the Xbox Adaptive controller which should work great on Xbox and PC. (Note: we didn’t test everything, so let us know if you are having trouble with a specific mouse or k/b!)

The EXO Salvage Initiative returns for a limited time! EXO accepts a variety of salvage types which can either be collected from exploration or crafted and destroyed or shredded. Astroneers are encouraged to employ the approach that is the most fun for them and ship their collected exports off using the EXO Request Platform!

Salvage items are worth different point amounts when shipped:

EXO supplies useful items and resources along the way to boost your recovery or production efforts. Randomized recurring rewards are available after completing the main event including:

“Space Snails” are now a part of the universe of Astroneer. Players have the opportunity to gain these unique and highly adaptable creatures as permanent companions that also give benefits to their caretakers.

Wow! It’s been almost three years since 1.0… can you believe it?! This February, we’ve got a celebratory cosmetic to share with players, from our heart to your head. Players logging in during a specific Anniversary time frame will get it for free – watch our socials for more details (Twitter, Discord, etc.)!

How to download updates for Astroneer for the Nintendo Switch?

To download the updates for Astroneer, you have three options: