Today’s Pokémon news: teaser for the new Mythical Pokémon for Pokémon Sword and Shield, but also…

The Pokémon Company have officially shared the teaser silhouette for the new Mythical Pokémon for Pokémon Sword and Shield, which will be revealed on Pokémon Day (February 27th): 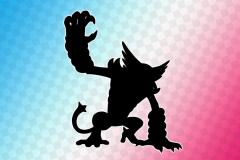 Heads up for players interested in completing the National Pokédex in Pokémon Home: you can get a pretty neat gift if you do so. That gift is none other than Original Colour Magearna, available for the very first time in-game (it previously appeared only in Pokémon The Movie: Volcanion and the Mechanical Marvel). The Pokémon is received via the mobile app (not the Nintendo Switch one), and is not available for all eligible players just yet.

As usual, you can find more details about the Pokémon distributions for Pokémon Home on this page.

Here’s the preview for the next episode of the Pokémon anime series, airing on Sunday (February 23rd) in Japan:

Here’s the English version of the preview video for Professor Oak, now available in Pokémon Masters as special Log-in Bonus until March 16th:

Here’s a promo video for the Pokémon Local Acts initiative in Japan: