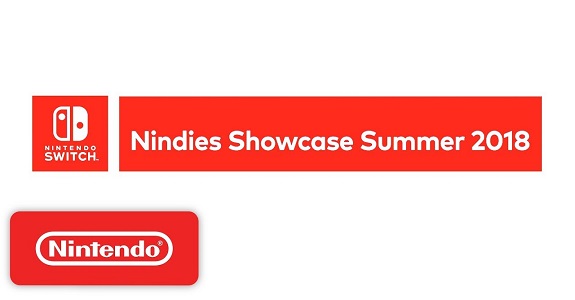 Today, during the Nindie Showcase Summer 2018, Nintendo revealed and showcase plenty of indie games coming to the Nintendo Switch in the upcoming months. Missed the presentation? You can now watch it in full on YouTube!

Here the recording of the Nindie Showcase Summer 2018

Here’s the various games showcased in the Nindies Showcase Summer 2018, once again put in two categories: games already announced that received a release date/window, and those that were previously unannounced.

The hit turn-based strategy game is headed to Nintendo Switch. In the stylish Into the Breach, players will suit up in powerful mechs and defend against the Vek infestation across randomly generated islands. Players can perfect their strategy and build the ultimate mech by finding powerful new weapons and unique pilots throughout the campaign.

Control powerful mechs from the future to defeat an alien threat. Each attempt to save the world presents a new randomly generated challenge in this turn-based strategy game from the makers of FTL.

Bastion is an action role-playing experience that redefines storytelling in games, with a reactive narrator who marks your every move. Explore more than 40 lush hand-painted environments as you discover the secrets of the Calamity, a surreal catastrophe that shattered the world to pieces. Wield a huge arsenal of upgradeable weapons and battle savage beasts adapted to their new habitat. Finish the main story to unlock the New Game Plus mode and continue your journey!

Zarvot is a charming arcade shooter about cubes. Play with friends in up to four player Versus mode and shoot lasers at each other on over a dozen destructible maps! And follow the adventures of two cubes in Story Mode as they make the ultimate birthday present to cheer up their best friend.

Superbrothers: Sword & Sworcery EP is an exploratory adventure with an emphasis on audiovisual style. Traverse a mythic little realm, use a sword to do battle & evoke ‘sworcery’ to solve mystical musical mysteries. Experience a videogame world that is affected by moon phases & help a wandering warrior monk complete her woeful errand.
Superbrothers: Sword & Sworcery EP features an album’s worth of original music by noted composer Jim Guthrie as well as artwork & designs by Superbrothers Inc, crafted & engineered by videogame wizards at Capy in Toronto, Canada.

Slash and blast your way through fantasy wasteland. The world of New Haven is a wasteland. The ARC empire destroyed it with a single Mutagen Bomb that transformed its creatures to mutated monsters. Join the Gunsword heroes in this classic co-op 2D action-platformer as they become the last hope for the United Resistance. Gain powerful abilities to dash, spin, and blast through creepy creatures, mutated soldiers and huge bosses. It’s up to you to stop the ARC from achieving world domination.

Levelhead is a creative platformer for 1-4 players. Run, jump, and warp up the corporate ladder of the Levelhead Division in the single-player campaign, research new elements for your very own level-building workshop, then build and publish levels for the rest of the world to play!

Transistor is a sci-fi themed action RPG that invites you to wield an extraordinary weapon of unknown origin as you fight through a stunning futuristic city. Transistor seamlessly integrates thoughtful strategic planning into a fast-paced action experience, melding responsive gameplay and rich atmospheric storytelling. Fight your way through the streets of Cloudbank, and piece together the Transistor’s mysteries as you pursue its former owners.

Jump. Grapple. Stack. Experience single and multiplayer puzzle mayhem! Treasure Stack fuses falling block puzzle mechanics with platformer elements to create a gameplay experience unlike anything you’ve played before. Use your platforming skills to navigate the play field, snatch falling blocks with the grappling hook, and stack them to create matches! Test your skills in Challenge mode, compete with friends in Local Versus mode, or jump into Online Versus and battle head to head!

Samurai Gunn 2 features a new, expansive adventure mode and an updated versus mode. Adventure with a friend through a medieval metropolis on the brink of crisis—fight or fly past your foes to discover the mystery behind Gunn City’s ghostly threat. …or battle together with a group of 2-4 friends in versus with improved controls, new levels, and new characters! A princess, a golem, a samurai knight, and a homeless girl all have a part in rewriting the fate of Gunn City forever.

The World Next Door is a narrative-driven, action-adventure game that follows Jun, a rebellious teen girl trapped in a parallel world inhabited by magical creatures. Inspired by the emotional storytelling and thrilling action of both anime and indie games, players can expect to meet and develop friendships with an eclectic cast of characters while uncovering the mysteries hidden within this world.

It’s a lovely morning in the village and you are a horrible goose. Untitled Goose Game combines sandbox-style simulation with slapstick-style shtick and lets players loose on a sleepy village. Make your way around town, from the village green to the high street shops, setting up pranks, stealing hats, and generally ruining everyone’s day.

Drift up in a mysterious world to find a cure for a deadly illness… and traverse a dark, detailed land with vicious enemies and secrets abound. Explore a beautiful, vast and ruined world riddled with dangers and lost technologies. Echoes of a dark and violent past resonate throughout a savage land, steeped in treasure and blood. Hyper Light Drifter is an action adventure RPG in the vein of the best 16bit classics, with modernized mechanics and designs on a much grander scale.

From the Producer of the original Fallout comes Wasteland 2, the sequel to the first-ever post-apocalyptic computer RPG. The Wasteland’s hellish landscape is waiting for you to make your mark…or die trying. With over 80 hours of gameplay, you will deck out your Desert Ranger squad with the most devastating weaponry this side of the fallout zone, test the limits of your strategy skills, and bring justice to the Wasteland.

The world-famous indie RPG UNDERTALE comes to Nintendo Switch! Fall into the underground and explore a hilarious and heartwarming world full of dangerous monsters. Date a skeleton, dance with a robot, cook with a fishwoman…or destroy everyone where they stand. The future is yours to determine!

What do skulking thieves do after a night of procuring shady spoils? They gather at a favorite tavern and wager it away on a friendly game of Light Fingers!
Played on a magical clockworks game board, this turn-based multiplayer game has real-time action and devious opportunities for misdirection, all in the pursuit of securing more loot than your opponents. For friends among thieves, bragging rights for the most deft are the biggest steal of all.

TowerFall is the ultimate version of the beloved archery combat/party game, featuring all of the content from Ascension and Dark World, and several Switch-exclusive additions!
Inspired by classics from the golden age of couch multiplayer, TowerFall centers around hilarious, intense versus matches – best played against friends, sitting cross-legged on the floor within punching distance of each other.

The core mechanics are simple and accessible, but hard to master, with a huge amount of gameplay variants, arrow types, power-ups, and levels. And when you need a break from the competition, team up in 1-4 player co-op modes, where you’ll fight off a wide variety of monsters, enemy archers, and bosses.

It’s the biggest Party Pack yet, including the return of the classic pop culture trivia mash-up YOU DON’T KNOW JACK: Full Stream; the game of hilarious hypotheticals Split the Room; the lyric-writing, robot rap battle Mad Verse City; the inventive drawing game Patently Stupid; and the outer space fling-fest Zeeple Dome. Use your phones or tablets as controllers and play with up to 8 players, plus an audience of up to 10,000!

Dragon MFD is a 2D side-scrolling action RPG game where up to 4 players can play together in either local multiplayer or online multiplayer. Refreshing, feel-good level designs based around intuitive 2D-action-based gameplay await!.

You’re broke, you’re hungry, and your only friends are a vintage hoverbike and a bowl of ramen noodles. In Desert Child, you are a young and talented hoverbike racer who needs to figure out how you can scrape enough cash together through racing and odd jobs to punch your one-way ticket to the Red Planet to enter the biggest race in the universe, the Grand Prix.

The world as we know it is slowly starting to become inhabitable, and many people on Earth have moved to Mars for a better quality of life, thanks to a government subsidy that assisted in relocating citizens by providing affordable passage. After several years of running this program, the government announces that in two weeks, tickets to Mars would go up in price, making the exodus to the Red Planet unobtainable for regular citizens.

You’ll deliver pizzas, collect gun parts, hunt bounties, and make some fans along the way. In between races, you’ll explore colorful cities where you can repair and upgrade your bike, dine on the local cuisine, and fight your way through gangsters, bounty hunters, and all sorts of interesting characters, just so that you can have a decent meal and keep your bike running. Nothing’s free in Desert Child.

Mineko’s Night Market is a narrative-driven adventure/merchant simulation game about crafting crafts, eating eats, and… catting cats. You play as Mineko, a curious girl who has just arrived at her new home on a struggling superstitious Japanese-inspired island at the base of Mount Fugu. The locals on the island worship the Sun Cat, Abe. What was always thought to be a long-told myth has the town puzzled, as sightings of Abe have begun to surface among the residents of the island in recent days.

Discover the secrets behind the town while managing your daily activities, completing various jobs, ven-turing on whimsical quests, and crafting peculiar items in preparation for the weekly Night Market! Mineko’s Night Market is a game that celebrates Japanese culture while introducing a heartwarming story about friendship, tradition, and many, many cats.