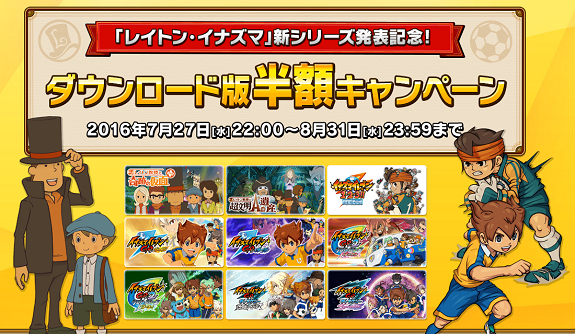 Update: added full recording of the livestream. You will find it below!

And the character that received the most votes was… Axel Blaze (Gouenji Shuuya), with 21.3% of all votes:

Unfortunately, we don’t know what role he will get to play in the new game, which will be revealed next week during the Level 5 Vision 2016 event.

During today’s livestream, it was announced that games from the Inazuma Eleven and Professor Layton series would be on sale from July 27th to August 31st. During that period, the Nintendo 3DS entries will be available with a 50% off discount from the Nintendo eShop.

Here’s the list of games and their sale prices:

Our Nintendo eShop Sales page has been updated!

Finally, here’s the full recording of the livestream: