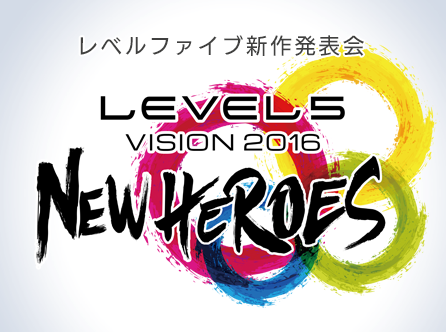 Last month, Level5 announced that the Level5 Vision 2016 event would take place on July 27th. This year, there will also be a special event for fans, logically called Level5 Fan Night, which will start a few hours later. And today, Level5 confirmed that both events would be streamed lived on both NicoNico and YouTube.

During this event, Level5 will reveal details about:

It will take place on July 27th, from:

The Fan event will have a Yo-kai Watch corner and a Inazuma Eleven corner, but also a talk show about Level-5 games, but also “activities” fans will able to take part in, and more. It looks like even fans who watch the event online will be able to participate in some way.

The Level5 Fan Night will take place on July 27th, from:

But before the Level5 Vision 2016 event and the Level5 Fan Night, there will be a special livestream on July 20th. During that livestream, new details about the new Inazuma Eleven game will be revealed, and more.

It will be livestreamed on July 20th at: