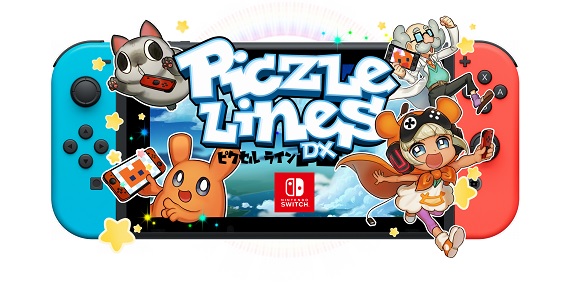 Today, a new downloadable game was announced for the Nintendo Switch: Piczle Lines DX (with Piczle standing for Picture Puzzle). It was originally released on smartphones in February, but it’s getting the DX treatment on Nintendo Switch this Summer.

It’s a puzzle game where your goal is to connect lines, in order to create pictures. Of course, said lines need to be of a certain length, indicated by numbers on the grid, and you also need to match the colour of the numbers. In short, you cannot connect lines if 1) it’s between two different numbers 2) the line isn’t long enough (3 cases when connecting two 4s, for example), 3) the two numbers are of a different colour.

Piczle Lines DX offers various game modes, including a Story Mode, Puzzle Mode, Giant Mode (with… well… Giant Puzzles!), and more. There’s over 300 puzzles to complete in the game, along with some Trophies to collect. Naturally, the first puzzles are pretty simple and straightforward, but things become much more complex as you progress through the game.

Piczle Lines can be played via the touchscreen in Handheld Mode, but also using the Joy-Cons on TV and Tabletop Mode.

Finally, here’s the debut trailer and some screenshots for Piczle Lines:

Piczle Lines (Switch – eShop) will be released this Summer. The Upcoming Releases page has been updated.

Shakedown Hawaii (Switch, 3DS – eShop) will be released later this year in Europe and North America.

Here’s some screenshots for Hover: Revolt of Gamers, releasing on the Nintendo Switch at a later date:

Here’s the latest gameplay clip for Sneaky Ninja (the first one in quite a while!), showcasing a tropical setting:

Sneaky Ninja (Wii U – eShop) will be released later this year in Europe and North America.