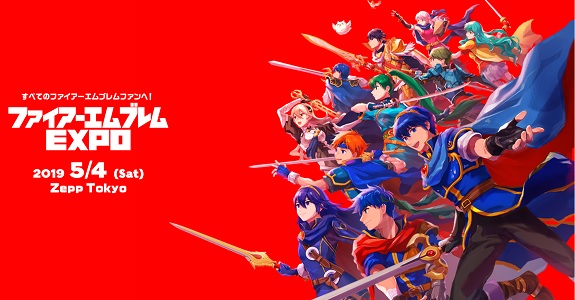 As announced last week, more details about the Fire Emblem Expo were shared during the latest Fire Emblem 0 (the Trading Card Game) on December 8th. Following that livestream, the official website of the event was launch, providing the same details that were revealed during the livestream.

First, here’s the main illustration of the event:

The Fire Emblem Expo is made of three main “events”:

What’s more, various goodies will also be on sale at the venue.

A live performance of various music tracks from the Fire Emblem series, with original arrangements, and from a large selection of games. Tracks to be performed includes Lost in Thoughts All Alone and the main theme of Fire Emblem (Heroes Ver.), with some songs getting new lyrics.

If you cannot attend the event (which is going to be the case of most western fans), don’t worry: an album of the live performance will be released later this Spring!

The following people will perform:

A special drama telling a “What if” story of the meeting of Ike and Micaiah. It’s a truly exclusive drama created specifically for this event, and there are currently no plans to make it available elsewhere by any means (audio and/or video recordings, etc.)

An exposition celebrating the 20th Anniversary of Fire Emblem: Thracia 776.

Finally, here’s various details about the event itself: