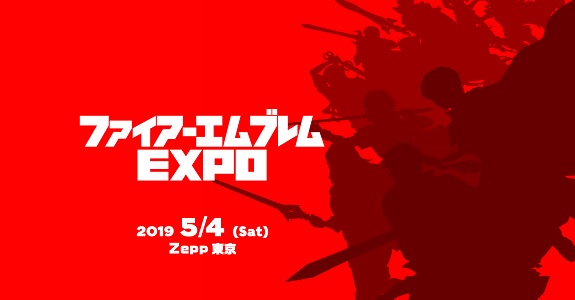 Update: details about the Fire Emblem Expo event are now available. Check out this post for them!

Next year is going to be a pretty big one for the Fire Emblem series, what with the release of Fire Emblem: Three Houses on Nintendo Switch this Spring (the first brand new mainline entry since Fire Emblem Fates, and the first game on a home console in nearly a decade). But there’s something else for fans to look forward to: the Fire Emblem Expo.

The Fire Emblem Expo will take place on May 4th, at Zepp Tokyo in Japan. Unfortunately… that’s pretty much all we know about the event for now! More details about it will be shared in the latest Fire Emblem 0 (the Fire Emblem Trading Card Game), which is scheduled for December 8th.

Here’s when the Fire Emblem 0 livestream will take place on December 8th:

Given the name of the event, it’s pretty safe to assume Fire Emblem Expo is a special event entirely dedicated to the Fire Emblem series (bet you didn’t see that one coming!). There most definitely will be some sort of events related to Fire Emblem 0 (such as tourneys), but that’s pretty much the only thing we can say with certainty for now. You might be tempted to think Fire Emblem: Three Houses will be showcased there, but since it’s slated for a Spring release, it might already been out by the time the Fire Emblem Expo takes place.

One thing we know for sure is that this is a paid event, and tickets will go on sale on December 28th. It’s unclear if any of the events / activities will be livestreamed or not, but that’s most likely something that will be mentioned during or after the livestream on December 8th.

We will make sure to update this post with any additional details as soon as we have theml. Stay tuned!