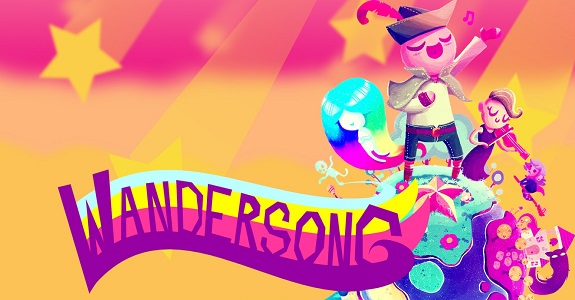 On this page, you will find all there is to know about the Software updates for Wandersong on Nintendo Switch (originally released on September 27th 2018 in Europe, and North America).

How to download updates for Wandersong for the Nintendo Switch?

To download the updates for Wandersong on Nintendo Switch, you have three options:

Get stuck when going to band break room after Act 2 concert
Soft lock when loading first screen of Act 5 castle
Rare error message and crash during Act 2 performance
Catterfly can follow you past where her battle ends
Crash when talking to Captain Lucas from the left in the pirate bar
3-ghost boss can scale strangely after battle is over
Unstable collisions and beat-tracking at low framerate
Unstable scene transition at end of Act 3 dungeon
Infinite loop entering pirate ship after encounter on boat
Possible to skip bridge scene in Act 5
Act 5 map missing information after completing main quest
Possible to sneak through the end of Act 5 spirit world without initiating encounter
Possible to lose Audrey in escape scene
Endless cut-scene loop in same scene
Typos + some dialogue tweaked
Unable to progress if the game is closed and re-opened directly after the climax
Some characters wouldn’t interact in Act 7 in certain conditions
Certain (minor) permanent choices were erased by Scene Select
Post-game secret had some missing prompts/would keep emitting light when disabled
Act 4: able to progress story without officially recruiting characters
Act 5: optional leaf on map appears to be required to progress story
Act 6: birds don’t always respawn
Act 6: wind changing directions a bit futzy in one segment
Act 6: softlock with Audrey during bug sequence
Act 6: A set of jumps are very high and a bit difficult
Post-game: Gabe can’t be interacted with
Act 3: Able to jump over certain room exit
Act 5: Infinite hug
Act 6: Birds don’t launch very far
Act 6: Birds STILL don’t always respawn
Act 6: Partner character’s pathing not great on low framerates
Act 6: Some platforming near the end is a bit high for the bard’s jump height on some framerates
Act 7: Reloading the big confrontation would have some heads swapped
Post-game: Scene select animated to frames and not deltatime
General: The D-Pad doesn’t register multiple notes when playing the same one multiple times
General: Screen blinks/flashes on some machines when changing volume in Options
Act 2: Accordion ghost duet can take an unusually long time to advance (please double check, I think this is fixed…)
Act 3: Crash when interacting with a character after throwing coffee but before Captain Lucas reacts
Act 4: Peter can sometimes be interacted with after expending all of his dialogue
Act 4: Crash when interacting with coal while holding something else
Act 5: STILL possible to miss scene on bridge outside of lumber town
Act 6: Stuck in pass-through wall near beginning of Seal section
Small typos in dialogue
Act 1: Rare broken spawn in Langtree
Act 3: Rare broken spawn near Calliope’s house
Act 4 spirit world: Broken animation when respawning from a certain spike in a certain area
Act 6: Possible to trap pushable rock and block progress
Act 6: Rare broken spawn after throne room
Act 6: Small physics change to help keep Audrey from getting stuck
General: typos and small text adjustments
Act 2: Rare broken spawn near the cemetery
Act 2: Occasional crashing on a 2nd playthrough of Delphi if you completed the Sue sidequest in a previous run
Act 6: Adjusted some path nodes to make the AI character more consistent