Yesterday, the official website for the concert was updated, and the latest two goodies were revealed:

In order to celebrate the 25th Anniversary of the Fire Emblem series, Intelligent Systems and Nintendo will hold special concerts on July 24th and 25th. Besides the concert, there will also be a talk-show (with various voice actors from the series, Masahiro Sakurai himself, and some developers), and a mini-drama. 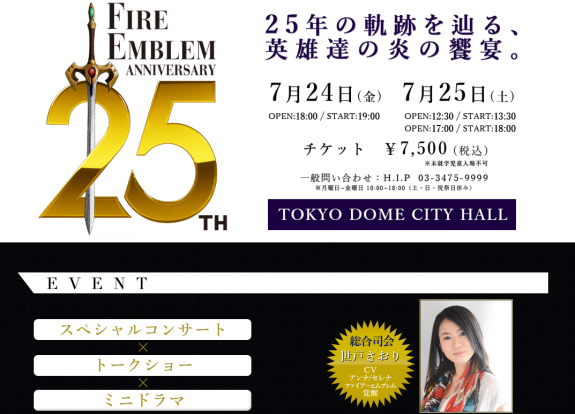 And today, it was announced that some goodies will be sold at the event. While many of them will apparently be exclusive to the concerts, the organisers mention that some of the goodies will also be sold elsewhere at a later date.

Here’s the various goodies which will be sold at the event:

* pre-sale at the event, will also be available for purchase after the event

Here’s some pictures for all those goodies:

The Fire Emblem 25th Anniversary concerts will take place on July 24th and 25th at the Tokyo City Dome!

Source: Fire Emblem 25th Anniversary website
Thanks StreetsAhead for the help with the translation of the CD (special anniversary box)!