This week, Genei Ibun Roku #FE will once again be featured in Famitsu magazine. We will get details about a mysterious incidents involving 17 performers disappearing (which is where the whole game begins), but also the downloadable content. As mentioned before, the game will get additional costumes and scenarios, and apparently, one of them will involve hot springs.

Genei Ibun Roku #FE (Wii U) comes out on December 26th in Japan, and next year in Europe and North America.

On February 18th, the Nintendo 3DS version of Mario & Sonic at the Rio 2016 Olympics will be released in Japan. On Thursday, Famitsu will reveal some details about the game in its latest issue. Some of the sports will be introduced, such as the 100m, Soccer/Football, BMX, Archery, Boxing, Table Tennis, Javelin Throw, or Golf (making its first appearance in the Summer Olympics in 112 years).

Mario & Sonic at the Rio 2016 Olympics (3DS) comes out on February 18th in Japan, and next year in Europe and North America. The Wii U version should follow at a later date.

Monster Strike comes out on Thursday in Japan, on the same day as the latest issue of Famitsu magazine. Unsurprisingly, it will be featured on the very cover of the magazine, which will have more details about the game. 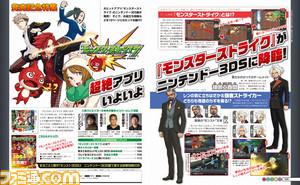 Shokugeki no Souma: Yuujo to Kizuno no Hitosara is also coming out this Thursday in Japan, and will get a 4-page article in Famitsu magazine this week. There will be some additional details about the game, but also impressions from the Famitsu journalists.

Shokugeki no Souma: Yuujo to Kizuno no Hitosara (3DS) comes out on December 17th in Japan.

Mario Tennis: Ultra Smash is already available in Europe and North America, but in Japan, it will not come out before January 28th. Therefore, there’s nothing surprising in Famitsu featuring it in its latest issue, to be released this Thursday.

Mario Tennis: Ultra Smash (Wii U) comes out on January 28th in Japan.