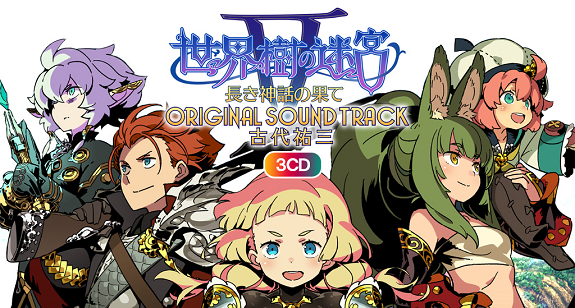 A few days ago, we learned that Etrian Odyssey V would get a very special bit of DLC… an alternate version of the original soundtrack, with FM synthesis tracks. If you’re a fan of retro music, you will have to pay 800 Yen for that DLC, which will let you switch between the two soundtracks at any time.

If you’re interested in the FM synthesis soundtrack, but don’t necessarily want to buy the DLC, there’s some good news for you. Atlus announced today that the soundtrack album for Etrian Odyssey V would be released on September 28th in Japan. It will include a total of 3CDs, with both versions of the soundtrack (“regular” and FM synthesis version).

This is by far the biggest soundtrack album for an Etrian Oydssey game, which isn’t too surprising since it includes both versions of the tracks. Naturally, everything was composed and arranged by the one and only Yuzo Koshiro, who has been in charge of the soundtrack of every single Etrian Odyssey game so far (including the Etrian Mystery Dungeon spin-off).

Here’s some additional details about the album:

Etrian Odyssey V (3DS) comes out on August 4th in Japan. Our Upcoming Releases page will be updated momentarily.