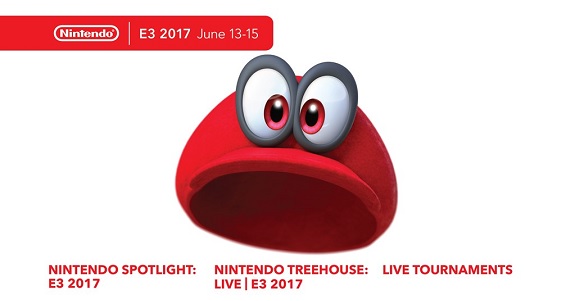 With E3 2017 drawing even nearer, it was only a matter of time until Nintendo detailed its plan for what is arguable the most important video game-related event of the year. And this year, Nintendo has a lot on its plate, with the Nintendo Spotlight (replacing the Nintendo Digital Event), the usual Nintendo Treehouse Live presentations, and not one but two tournaments!

E3 2017 takes place from June 13th to June 15th, in Los Angeles, and Super Mario Odyssey (on Nintendo Switch) will be playable for the very first time at the event, alongside other Nintendo Switch games. As usual, the official website for Nintendo at E3 can be found at http://e3.nintendo.com/!

Nintendo Spotlight: E3 2017 is a video presentation where Nintendo will announce new details for Nintendo Switch games launch this year. The focus will be on Super Mario Odyssey and games releasing this year, but it looks like we can also expect games launching in 2018 to be announced/showcased during this presentation.

Nintendo’s wording implies that the presentation will not reveal anything for the Nintendo 3DS, which means that such games will most likely be showcased/announced only during the Nintendo Treehouse: Live at E3 presentations.

The Nintendo Spotlight: E3 2017 video presentation will be streamed live at the usual time, on June 13th:

We will add links and livestreams at a later date. Stay tuned!

Nintendo Treehouse: Live at E3 has always been one of the highlights of Nintendo’s presence at E3, ever since the company began doing those livestreams, and so it’s no surprise it’s back for E3 2017. As usual, it will start right after the Nintendo Spotlight presentation, and will showcase various Nintendo Switch and Nintendo 3DS games.

The whole thing will be streamed live from the Nintendo booth on YouTube and Twitch. There will be gameplay footage, behind-the-scene info, as well as commentary from game developers and members of the Nintendo Treehouse. If you already watched Nintendo’s E3 coverage in the past few years, you know what to expect!

This year, Nintendo will host not one, but two tournaments, that will both be livestreamed from the E3 show flor:

Nintendo specifies that more details about E3 2017 activities will be shared closer to the event.