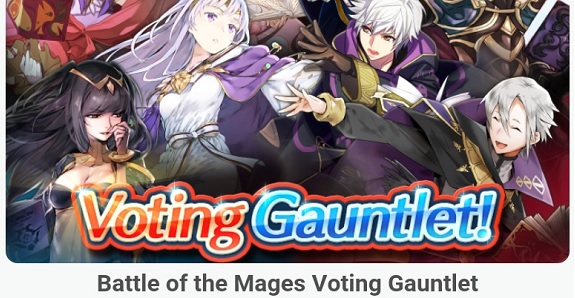 The Battle of the Mages Voting Gauntlet is over, and it’s Tharja that won! The total number of votes during the event was 131 700 378 446, so all players will get the Grand Reward (listed below) at a later date.

Today, the third Voting Gauntlet was announced, called “Battle of the Mages”. As the name implies, it pits various mages against each other. It will take place from May 12th to May 18th.

(NB: you can find times for your timezone in the notification).

Here’s the various characters this event is about:

With this third Voting Gauntlet, rules have been modified. Now, the losing army gets a x3 score bonus for a limited time (if that army is losing for more than 1 hour). Click here for more details!

The more you battle, the more rewards you will get.

The overall voting score will be announced after the event ends (on May 18th). The Grand Rewards will be distributed to players as a special log-in bonus.