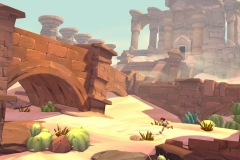 Spike-Chunsoft have confirmed that AI: The Somnium Files will be released in Europe, though it will not be a simultaneous release. It will be available from September 20th in that region, which is a few days after North America, and one day after Japan. You will be able to buy it at retail and on the Nintendo eShop, like in the other two regions.

AI: The Somnium Files (Switch) comes out on September 17th in North America, September 19th in Japan, and September 20th in Europe. The Upcoming Games page has been updated!

The latest DevBlog post for Decay of Logos went live today, and unfortunately, it once again does not have anything really new. Click here to check it out!

Here’s the latest screenshot and video clip for the game:

Here’s the latest tutorial video for Puyo Puyo Champions, which is about Power Chains:

Puyo Puyo Champions (Switch) comes out on at retail on June 27th in Japan.

Psyonix have shared a written Making of the Replay FX feature, which was added in a recent update for Rocket League, and allows players to edit their replays. Click here to check it out!

Here’s the Highlight Reel from the latest Aksys Games livestream, which was about Little Dragons Café: