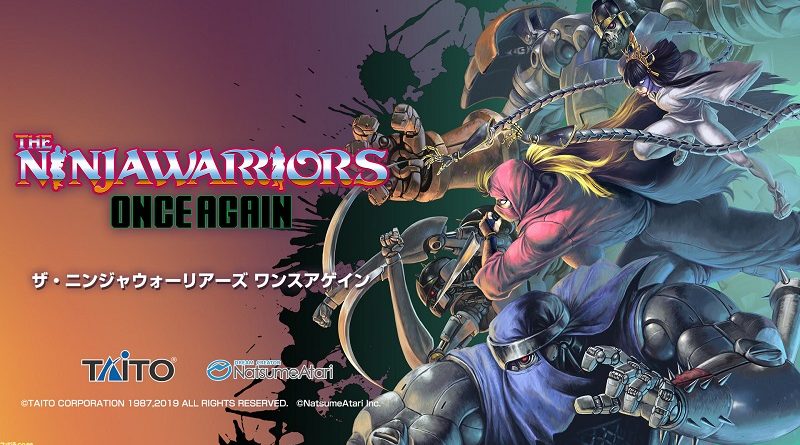 Today’s Daily news: release date for The Ninja Saviours: Return of the Warriors in Europe and North America, but also…

The Ninja Saviours: Return of the Warriors

ININ Games have announced that The Ninja Saviours: Return of the Warriors (known in Japan as The Ninja Warriors: Once Again) will be released on August 30th in Europe and North America. Each copy of the game at retail will include a poster, a sticker set, and a manual. Finally, players who pre-order the a physical copy will get an exclusive keychain.

In THE NINJA SAVIORS – Return of the Warriors, the player assumes the role of one of five android ninjas to take on the tyrant Banglar and his henchmen with a variety of individual moves in a dystopian future. Along with two completely new characters, the fully revised side-scrolling arcade brawler also finally offers fans the eagerly awaited two-player co-op mode and an online ranking system so that you can measure yourself against fighters from all over the world. In a total of 8 levels, players will brawl their way through waves of enemy hordes, either alone or in pairs.

Not only is long-term motivation provided in single-player mode, THE NINJA SAVIORS – Return of the Warriors also makes comfortable couch co-op game evenings with friends possible, just like you remember and love from Super Nintendo classics of the 1990s.

The original developers from back in the day, TENGO PROJECT, have also made an already outstanding game even better audiovisually in every respect. The 16-bit pixel art of the classic has been retained, but significantly revised, and new animations have been added. The legendary sound of TAITO’s house band ZUNTATA is, of course, part of the fun once again, and along with the original soundtrack from the arcade machines, there will also be the music from the Super NES version and a completely newly arranged soundtrack on offer.

The Ninja Saviours: Return of the Warriors (Switch) comes out on July 25th in Japan, and August 30th in Europe anjd North America. The Upcoming Games page has been updated!

Here’s the latest video for Bustafellows:

Bustafellows (Switch) comes out on December 19th in Japan.

Today, shmuplations shared not one, but two interview with Yasumi Matsuno. The first one is with Hideo Kojima, and can be found on this page!

Matsuno: I think the people involved in creative industries today probably share a lot of those same “genes”, whether it’s loving movies, loving manga, or whatever. Even in cinema there are so many genres and directions you can go in, and I think it’s the same for games. With Vagrant Story, I had almost zero involvement in the visual presentation. I left most of it up to Akiyama, but in talking with him, I discovered he loved a lot of the same movies as me. What happens when you work with another human being who has some of those same genes with you? Unconsciously, it brings a feeling of unity to your creation. In that sense—and this isn’t only limited to directing, but also for programming, art design, and music—when building a team, I try to select people who share a lot of things in common. A completed work that has been coordinated in this way has a “special something” that audiences can sense and appreciate. It makes it more interesting.

The second one is with the one and only Shigeru Miyamoto, and can be found on this page!

Miyamoto: No, they don’t. Part of that is the age gap between me and the younger developers. (laughs) I know I have a reputation for ordering massive revisions and “flipping tables”, as it were, but in reality that’s more of a joke we’re all in on. I mean, there have been times when I’ve actually made them re-do everything, but in truth it’s really more of an established ritual now, that I will come by at some point and critically evaluate the project. (laughs) I feel it’s a way to lighten the mood—no one wants to have their work scrapped, but having this joke about how I go on rampages helps ease the pain for the developers who do end up having to make major revisions. It’s sort of a clever way to try and keep things positive, and I’m in on it too. (laughs) It’s a delicate, subtle relationship.