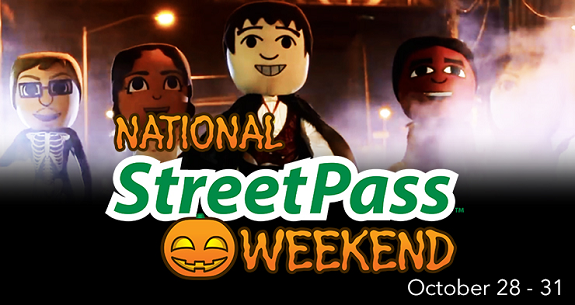 Today’s Daily Briefs: StreetPass Week-End for Halloween in the United States, but also…

To the surprise of… no one, the next StreetPass week-end in the United States will take place from October 28th to November 1st, just in time for Halloween. Click here to learn more about that, including the kind of content you could get via StreetPass!

Remember the Kirby: Planet Robobot Drawing and Screenshot Challenge, which was announced a couple of weeks ago? Well, it’s going to be open for your submissions, starting… right now!

Yesterday, the Nintendo eShop Halloween Sale went live in Europe: you can click here to find out which games are on sale, or check out our Nintendo eShop Sales page for the list of all games on sale right now. But it looks like there’s also going to be a Part 2 for this sale.

From October 27th to November 3rd, the following games will be on sale on the Nintendo eShop in Europe:

Unfortunately, we don’t know what the sale price for those games will be, but we will know on Monday with the weekly Nintendo eShop PR. That’s when we will update our Nintendo eShop Sales page.

Unlike North America, Europe will get a physical version of Picross 3D Round 2. Therefore, we do have a boxart for that region!

Picross 3D Round 2 (3DS) comes out on December 2nd in Europe.

Here’s the European launch trailer for Rhythm Paradise Megamix (on Nintendo 3DS), which is now available in Europe!

Today, Nintendo uploaded three trailers, for some Halloween games on Nintendo 3DS and Wii U:

Where would modern games be without voice actors and motion capture actors? They have become a key elements in the creation of video games (especially the so-called AAA titles), and yet, they don’t seem to be properly compensated. As a result, the SAG-AFTRA, the largest actors union in Hollywood, has officially called a strike early Friday morning against several prominent video game companies.

You can learn more about this over at LA Times.